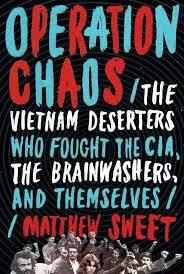 In Reason magazine, the wonderful Paul Krassner reviews Operation Chaos: The Vietnam Deserters Who Fought the CIA, the Brainwashers, and Themselves, by Matthew Sweet, a book about American deserters from the Vietnam War who wound up in Sweden. Many came under the domination of Lyndon LaRouche.

LaRouche's crazy beliefs, or more precisely, his ability to get other people to take his crazy ideas seriously, are a striking feature of the American political landscape. Sometimes Donald Trump seems like a LaRouche who can play to the masses.

Apparently the book also shows that the sense of pervasive paranoia during the 1960s and 1970s depicted in Illuminatus! isn't something the authors made up. Krassner, writing about the pressures on the deserters:

"And part of the problem was that the deserters were clearly under surveillance. When many of an organization's members are already damaged people, and when their leader is already subjecting them to psychological abuse, it doesn't do anyone's sanity any favors to have actual good reasons to suspect some of your comrades are spies. As Sweet interviews the men who fled to Stockholm, he finds that several still carry suspicions about one another to this day—and he can't help wondering about some of them himself.

"Sweet never quite solves the mystery of who was or wasn't a government agent, but he paints an engrossing portrait of a place and time where such fears were rampant."

Many people who read this blog likely would enjoy Krassner's Confessions of a Raving Unconfined Nut (see my remarks here, and also here.)