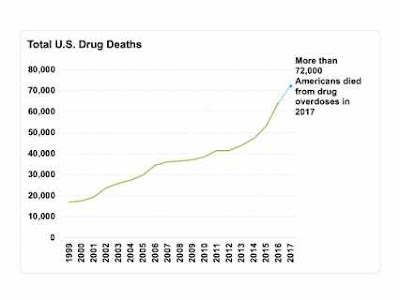 National Institute of Drug Abuse graphic showing the increase in drug overdose deaths in the U.S.

Drug overdoses from hard drugs have killed hundreds of thousands of Americans in the past decade, and the problem is getting worse nationally. As my link shows, 2017 was a record year for deaths nationally (and also, I might add,  in Ohio where I live.)

The Trump administration has shown little interest in genuinely dangerous drugs but instead is using the IRS to target groups that advocate for the legalization of marijuana. This blog post reprints a Wall Street Journal article (which at the WSJ is behind a firewall) that gives the details. Tax exempt status is a really big deal in the U.S. for nonprofits, so this is a significant (and also illegal) act of government repression and an attack on free speech.

UPDATE: Here is a clickable link for the article Joshua linked to in the comments.  Rep. Dana Rohrabacher, quoted in the article, lost his re-election bid, a notable loss for the legalization movement, although on the whole the Democratic takeover of the House was a positive.

The Trump Administration has actually shown great concern over the opioid epidemic. That is one of the reasons for the wall. Hard drugs are pouring over the border from down south. Hence the increased border security. Trump is seriously looking at legalization on a federal level for medicinal purposes, while leaving recreational legalization up to the states themselves. There is a video of RAW talking about how shitty it was for Bill Clinton to come in and say fuck you to California for making the call to legalize marijuana for medicinal purposes in 1996. I think what Trump is proposing in the spring may have made sense to him. It does to me. https://www.washingtontimes.com/news/2018/oct/11/donald-trump-will-push-federal-marijuana-reform-re/