More on Communism, the Beatles and Illuminatus! 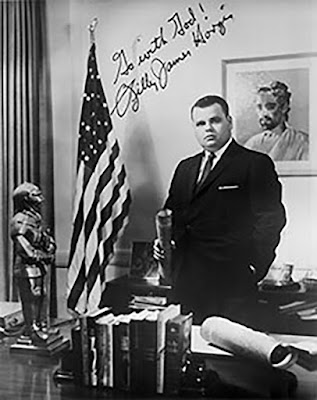 A photograph of the Rev. Billy James Hargis. As Adam Gorightly notes, the picture of Jesus behind Rev. Hargis shows Jesus with short hair, apparently in a bid to make the Son of God look more like a patriotic American and less like the kind of long haired hippie who would listen to a Beatles album.

Adam Gorightly recently posted "The Raymond Broshears Files Part 1: Welcome to the Garrison Investigation Funhouse," about a rather colorful character associated with the Garrison probe of JFK's murder, and when I posted about it, I talked about the connection between Broshears and the Rev. Billy James Hargis, an evangelist in Tulsa, Oklahoma (where I grew up) who was also an explicit anti-Communist. I once attended a service at Hargis' Christian Crusade church (as part of a comparative religion class in the Unitarian church my family belonged to), and I knew a kid at school whose family went to the church. I then went off to college at the University of Oklahoma and read Illuminatus!, which has a reference to a Christian Crusade publication by David Noebel, Communism, Hypnotism and the Beatles; An analysis of the Communist use of music, the Communist master music plan.

Adam has now done a follow-up post at Historia Discordia, "Addendum to 'The Raymond Broshears Files Part 1' ” which discusses Rev. Hargis and which includes a particularly great prank letter that Robert Anton Wilson wrote as a purported fan letter to Noebel (the letter is by "the Rev. Charles Arthur Floyd II" representing an apparent religion, the "Decided Ones of Jupiter the Thunderer.") The letter points out that while Noebel has done fine work, he has "only scratched the surface of the music problem," noting that Beethoven was a high ranking member of the Bavarian Illuminati, "and his music, especially the Fifth and Ninth symphonies, is entirely worthless and seditious, being full of libertine, libertarian, anarchistic, Illuminated Seer ideology." (Wilson may have only been joking -- I don't know -- but the Jan Swafford Beethoven biography goes into considerable detail about how the Illuminati actually influenced the Ninth Symphony and other works. It is my impression that Wilson thought he was only joking when he wrote Illuminatus! and only later discovered the Beethoven-Illuminati ties, but I can't give you a citation; can someone help?).

David Noebel is apparently still alive. His classic expose, Communism, Hypnotism and the Beatles, is available at the Internet Archive, apparently as part of an FBI file obtained through the Freedom of Information Act.

That picture of Jesus looks a lot like Sammy Davis Jr.