Apparently, I'm not going to emerge 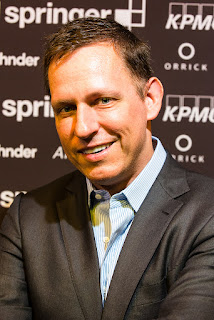 From time to time, I have fantasized about finding a billionaire who was (1) a Robert Anton Wilson fan and (2) crazy, someone who would be willing to fund this blog so it would be more of a full time project and less like something I have to do part time, fitted in around a full-time job, keeping my wife and cats happy, etc.

This became very slightly less of a fantasy with the creation of Emergent Ventures, a philanthropic organization run by the doughty Tyler Cowen (frequently mentioned on this blog for years) and funded initially by Peter Thiel (who as I've mentioned has been trying to achieve some of the ideas proposed by Robert Anton Wilson). In his blog post, Dr. Cowen wrote, "We welcome the unusual and the unorthodox."

I figured I could give him "unorthodox," so I applied for money,  laying it on thick about Wilson's importance as a thinker, the blog's ability to introduce libertarian ideas to an audience that normally ignores them, the original journalism and scholarship I've been able to carry out such as obtaining Robert Shea's anarchist zines and interviewing Wilson's book editors, etc.

All I know about the review process is that Cowen makes the decisions himself (so, possibly, I was able to get him to read this blog! If so, hope he found something of interest). It was interesting to write out a justification for the blog. I also enjoyed the "Schroedinger's cat" period of several weeks of not having actually been turned down.

But my "No" email from the Mercatus Center duly arrived Tuesday. It says, in part, "We are sorry to inform you that we are not able to fund your request. Due to the large volume of applications, we are also not able to offer individual explanations for these decisions.

"Please do note that our rejection should not be taken as a negative judgment of you or your work. For instance, many requests simply fall outside the scope of our mission, or we believe would be better supported through traditional venture capital or philanthropic investments."

(I've mentioned Cowen a number of times in recent weeks as I waited for a response, but that's just business as usual at this blog, not an attempt to curry favor. I've mentioned him for years.)

Due to the ongoing dearth of crazy billionaires, I am actively exploring and thinking about other options to expand the reach and effectiveness of this blog and related freelance ventures.
on November 29, 2018