A business book by RAW fans? 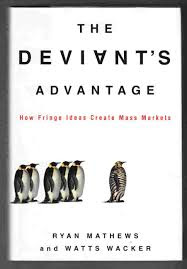 The Deviant's Advantage: How Fringe Ideas Create Mass Markets by Ryan Mathews and Watts Wacker came out in 2002. The book apparently is a business book that describes how fringe ideas or practices can become mainstream, and both authors are described as futurists. Mr. Wacker died last year.  Both have written other books.

Our English friend Nick Helweg-Larsen emailed me about the book after noticing that Robert Anton Wilson is mentioned in the footnotes, which have a citation from Quantum Psychology on page 128. The cited quotation is from Nick Herbert, quoted as saying, "Reality? We don't got to show you no steeeenking reality."

I don't have time to read the book right now, but when I looked through the footnotes I found citations from a variety of people in RAW's circle or who knew RAW, including Jesse Walker, R.U. Sirius and Douglas Rushkoff, and references to people RAW was interested in, such as Clifford Irving, Rupert Sheldrake and Joseph Campbell.