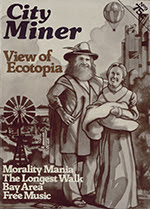 Written in 1978, it's one of Wilson's more libertarian pieces and also seems to anticipate today's culture wars. It's full of sharp observations. A sample:

Of course, every human society has some system of criminal law. Such laws should be rational and obviously necessary: their function is, as Sophocles said, to protect the citizen from force and fraud. This is absolutely all that a rational mind wants, or will voluntarily accept, in restrictions on personal freedom. My right to swing my fist ends where your nose begins.

This common-sense, mind-your-own-business theory of law has never been satisfactory to moralists, all of whom are determined to ram their private taboo system down everybody else’s throat. This is because moralists, like psychotics, do not think objectively, but subjectively; they don’t even know what objectivity means. For instance, read any rightwing blast at Larry Flynt and then read the attack on him in Mother Jones for February-March 1978. The same subjective smog, the same inability to see or observe without prejudice, appears in both the paleo-puritanical right and the neo-puritanical left. The moralist cannot perceive anything but his/her own emotions; facts register indirectly, as emotional storms in the glandular system.