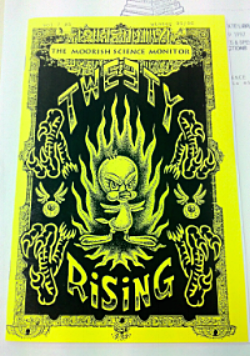 Cover for an issue of the Moorish Science Monitor

Christian Greer has announced he has launched the Moorish Orthodox Church of America archive, devoted to preserving radio broadcasts and other cultural productions of the group.

This page is designed to provide an archive for the material culture of the The Moorish Orthodox Church of America. This diminutive church emerged in the first half of the 1960s on the Upper West Side of New York City, and before long, its members became embedded in the network of religious fellowships, esoteric sects, and street crews that populated the larger New York City bohemian scene. This psychedelic enclave provided fertile ground for the Moorish Orthodox Church of America (henceforth MOCA), which soon produced its own publications, and radio shows. It also operated its own temple/head-shop (known as The Crypt) on W. 103rd street. In addition to focusing on their own spiritual self-cultivation, members also doubled as "righteous dealers" who dispensed the "sacrament" of LSD to their brothers & sisters. The church worked alongside dozens of other heterodox mystical sects, as well as an army of psychedelic evangelists, to seed wide-spread spiritual illumination, and their combined efforts produced an exuberant culture of religious experimentation that soon spread across America, and points beyond.

More about the church on Wikipedia.

The archive includes many radio programs featuring Peter Lamborn Wilson (aka Hakim Bey), thought to be lost. You can listen to them on Greer's new site.

Over the course of Robert Anton Wilson and Peter Lamborn Wilson's two-hour on-air exchange, they offered an intimate look at the obscure persons, ideas, and events that characterized psychedelicist radicalism as of 1987. During their conversations, these men traced the genealogy of their own illuminated politics, beginning with early 20th century individualist anarchism, up through the psychedelic era (both had spent time at Millbrook), and far into the future, which they imagined in cyberpunk terms.  It was clear, even then, that their lively conversation represented an invaluable literary document, as it elicited a sizable response from listeners. In fact, the demand for copies of the show prompted WBAI to issue special cassette tape recordings as a premium for its highest-level contributors.

Greer is cleaning up the audio for that show, which will be posted soon. I'll let everyone know here when it's available.
on November 16, 2018