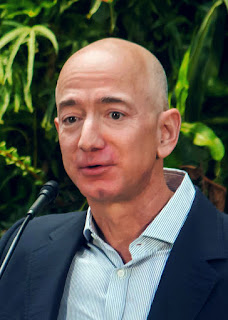 The dream of space migration promoted by the likes of Timothy Leary and Robert Anton Wilson remains alive; Elon Musk is perhaps the best known exponent, but Jeff Bezos is further along with his own rocket company than I realized, according to this fascinating Wired magazine piece by Steven Levy.  (The Oct. 15 piece identifies the main leaders of startup space ventures as Musk, Bezos, Paul Allen and Richard Branson. Of course, Allen has just died, so who knows what happens to Allen's effort).

Bezos' Blue Origin rocket company is connected to one of my favorite writers besides you-know-who:

After Princeton, Bezos put his energies toward finance, working at a hedge fund. He left it to move to Seattle and start Amazon. Not long after, he was seated at a dinner party with science fiction writer Neal Stephenson. Their conversation quickly left the bounds of Earth. “There’s sort of a matching game that goes on where you climb a ladder, figuring out the level of someone’s fanaticism about space by how many details they know,” Stephenson says. “He was incredibly high on that ladder.” The two began spending weekend afternoons shooting off model rockets.

In 1999, Stephenson and Bezos went to see the movie October Sky, about a boy obsessed with rocketry, and stopped for coffee afterward. Bezos said he’d been thinking for a long time about starting a space company. Why not start it today?” Stephenson asked. The next year, Bezos incorporated a company called Blue Operations LLC. Stephenson secured space in a former envelope factory in a funky industrial area in south Seattle.

When Bezos talks about space migration, he sounds not unlike Leary or Wilson:

The solution, as Bezos sees it, is to get off the planet to better exploit solar power, so that the sun’s abundant photons can support the fruitful existence of countless people. (We’d also grow real fruit in space.) “Wouldn’t your grandchildren’s grandchildren’s lives be so much more exciting if there were a trillion humans in the solar system who used more of that output to do amazing things?”

Incidentally, the Washington Post seems to be doing well under Bezos' ownership.

Thank you Charles Faris for sharing this with me.
on November 08, 2018

I hope we can get out of the ass end of the gravity well, even if it has to be done by rich assholes. I fear we’re all doomed if we can’t let at least some people out.