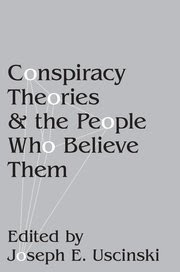 If your interest in conspiracy theories wasn't sated by reading Illuminatus!, or by reading Jesse Walker's excellent book The United States of Paranoia: A Conspiracy Theory (a history of conspiracy theories in the U.S., including a chapter, "Operation Mindfuck," that discusses Robert Anton Wilson and Discordianism), there's a new book that might interest you.

Jesse reports on a new book, Conspiracy Theories and the People Who Believe Them, put out by Oxford University Press, an anthology that includes a contribution by Jesse.

Mr. Walker's contribution, "What We Mean When We Say 'Conspiracy Theory'," is available as a Reason magazine article.

Incidentally, in a section of the piece debunking a widely-believed newspaper report that described Osama bin Laden as having a lair in Afghanistan worthy of a James Bond villain, Jesse writes, "When American forces arrived at Osama's actual base, they found that the Independent report was a fantasy, something better suited for a legend about Hassan i Sabbah than a realistic assessment of bin Laden's methods and capabilities." Just another little test if you can spot the Robert Anton Wilson reference that creeps into many of Jesse's pieces, like a cameo from Alfred Hitchcock.
on November 24, 2018