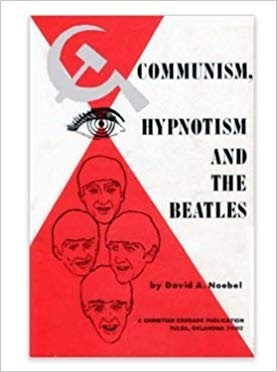 Adam Gorightly, Discordian historian and the author of the book Caught in the Crossfire: Kerry Thornley, Oswald and the Garrison Investigation, has posed a new article on an unusual person who was caught up on the JFK investigation. The piece is called "The Raymond Broshears Files Part 1: Welcome to the Garrison Investigation Funhouse." Raymond Broshears sounds like a character in Illuminatus! but was a very real person who told some very wild stories about the assassination that appear to be largely untrue.

May I add a footnote? Adam writes,

"In the late 1950s, Broshears graduated from Lee Bible College in Tennessee, and later studied under the fire and brimstone southern Baptist preacher, Billy James Hargis. George Mendenhall of the Bay Area Reporter later discovered that Hargis excommunicated Broshears when he discovered his sexual proclivities."

What this passage refers to is that Broshears is gay. But Hargis  himself lost his career because of allegations he seduced students, both male and female.

Hargis ran a church called the Christian Crusade, in Tulsa, where I grew up. But what I wanted to point out was that Adam's passage about Hargis connects Broshears to Illuminatus! The Illuminatus! trilogy mentions a pamphlet called Communism, hypnotism and the Beatles;: An analysis of the Communist use of music, the Communist master music plan. That may sound like satire, but it was a real publication, put out by Hargis' Christian Crusade.