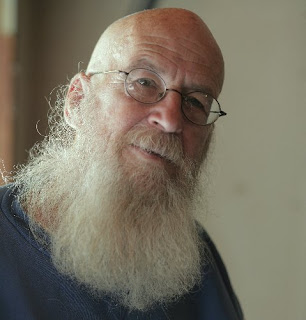 "Hippie physicist" Nick Herbert of Cosmic Trigger fame is interviewed by Scientific American, and it's a very interesting interview. Lots of good questions from John Horgan.

Herbert no longer thinks  that faster-than-light communication is possible. Here is one of his thoughts about physics and mysticism:

Horgan: Looking back, does the analogy between quantum mechanics and eastern mysticism hold up?

Herbert: For many years physics held the distinction as "the subject everyone hated in high school," but Fritjof Capra's Tao of Physics made the subject sexy again and paved the way for such bestselling quantum physics popularizations as Heinz Pagels's Cosmic Code and my own Quantum Reality.

However I am sorry to say that despite immersing myself deeply in the quantum paradoxes and less deeply in meditation and mindfulness, I find them both profoundly mysterious but having little in common.

In his blog post about the interview, Herbert notes that Horgan has published what appears to be an interesting book,  Mind-Body Problems: Science, Subjectivity & Who We Really Are, available free online. Herbert writes, "In this book, Horgan interviews nine specialists representing nine different perspectives on human subjectivity. This book is unusual in that Horgan does not just interview these nine people about their ideas but about their personal lives as well. John's curiosity and desire to really know what's going on entangles himself and the reader in a sometimes embarrassingly intimate connection with some of these scientist's personal lives. For that reason, this book is a lot more lively than your typical psychology textbook."
on October 14, 2018