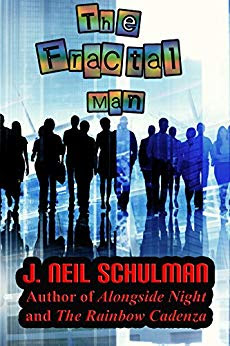 Libertarian SF writer J. Neil Schulman has a new book out, The Fractal Man. Published as an ebook, it's only 99 cents. I finished my copy a few weeks ago and enjoyed it.

The Fractal Man is an alternate worlds novel, featuring different versions of Schulman and his good friend, Samuel Edward Konkin III, a prominent libertarian figure who published many pieces by Robert Anton Wilson in his "New Libertarian" journal. Konkin also is mentioned at the beginning of Wilson's Natural Law, as the editor who published the original version of the piece, "intercut with a running commentary by himself, in the form of numerous footnotes attempting to rebut all my major points."

In our universe, Konkin died relatively young, age 56, in 2004. In Schulman's book, Schulman discovers that Konkin is still alive, when Konkin phones wondering why Schulman hasn't shown up to take the two to a SF convention.

The novel is essentially a series of amusing adventures as the two move from universe to universe, although underneath the comedy the book is rather poignant; Schulman is mourning his dead friend who died too young, and perhaps looking back at some of his own life choices.

The use of parallel universes recalls Schroedinger's Cat a bit, and in fact, RAW and the Cat trilogy  is name checked in the text. Looking at the possibilities implied by parallel universes, Schulman writes, "To me, this means the entirety of existence -- God and his fractals -- might as well be viewed as a multi-versal Schroedinger's Box -- and the Cat is whoever has the superposition to write the plot.

"I wish I could tell this joke to my old friend, Robert Anton Wilson.

I asked Schulman via Facebook if he was in fact friends with Wilson. "Yes, I was friends in my real life with Robert Anton Wilson. He endorsed several of my books including Alongside Night and recommended my book The Frame of The Century? to his editor at Harper Collins (to no avail -- she was unwilling to publishing anything that didn't assume Simpson was the murderer)."

The Fractal Man has an amusing chapter in which in one of the universes next door, Schulman acquires a lot of money and launches a libertarian film studio. I suggested to Schulman that his film studio had overlooked a miniseries of Illuminatus!

"You're right, Illuminatus! would be on the production roster of Paraversal Pictures -- on oversight on my part," Schulman replied.

There are quite a few jokes in the book about libertarians and life at science fiction conventions. The book has one reference to Donald Trump that I thought was quite funny.