My Halloween reading, and RAW's 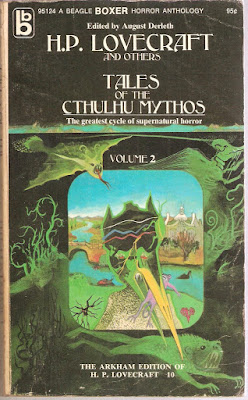 I like to read a bit of horror fiction during the Halloween season. This year, I'm reading a story collection, Tales of the Cthulhu Mythos, Vol. 2, edited by August Derleth, that's connected to Illuminatus! I bought it at Confluence, after Gregory Arnott spotted it in the dealer room and called it to my attention.

Gregory told me the book is mentioned in the appendix, and sure enough, it is, at the end of the appendices, in an entry on "George Dorn's older brother" who "had an adventure with talking dolphins before George did." The entry doesn't list which story, but it's "The Deep Ones" by James Wade.

There are other signs that Robert Anton Wilson read the book. Illuminatus! mentions an oddball "Starry Wisdom" church on the island of Fernando Poo. "The Haunter of the Dark" by H.P. Lovecraft in the Derleth anthology also has a Starry Wisdom church, and Robert Bloch's "The Shadow From the Steeple" also mentions Starry Wisdom, too. (Robert Shea was not particularly a Lovecraft fan; all of the Lovecraft references appear to come from Wilson).

By the way, the first story in the anthology, Bloch's "The Shambler from the Stars," kills a character who is apparently H.P. Lovecraft. Lovecraft returns the favor by killing "Robert Blake" in "The Haunter in the Dark."