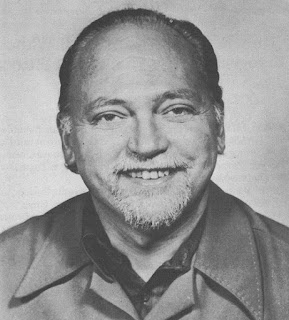 Martin Wagner does is again, unearthing another RAW interview. "Half Witness at the Trigger: An Inter-Review with Robert Anton Wilson," an interview by Dean Gengle, appeared in The Advocate, the gay publication, in February 1978.

This is a particularly good interview.  (And did RAW really once live in a commune?) A few highlights:

I’ve noticed that when I’m most happy and high I get strange input from others who seem to want to penetrate that happiness with all kinds of reasons why I shouldn’t be happy. It’s an interesting phenomenon.
Robert Anton Wilson: I agree with Don Juan. Almost everybody is a black magician. The whole art of life is just to not let them bring you down. Once you figure it out you find that everybody or nearly everybody in one way or another is looking out suspiciously for signs of happiness; and whenever they see it they pounce in one way or another: paranoia, depression or something that’s your fault, which, once you’ve attended to, will bring you down into their misery.

I’m trying to understand sexuality as it connects with various forms of ritual, both practically and theoretically. Could you talk a little bit more about ritual?
Robert Anton Wilson: When I first got started on consciousness work, or whatever you want to call it, I was not into ritual at all. I was very heavily into Zen meditation and I regarded ritual with a great deal of contempt. Then I went through a complete turnabout and I decided that meditation just wasn’t for me, but I was getting tremendously good results with ritual once I started working with it and, for a while there, I was going around telling everybody: “Oh, fuck meditation, it’s a waste of time. Ritual is where you get the action.” And finally it dawned on me that that’s just me. I’m a novelist. I think novelists are particularly prone to get good results out of ritual because every novelist is to some extent a frustrated actor, a playwright, a playwright/actor/producer. You’re trying to put on a show in your own head that will become real in the head of the reader, and so novelists, I think, are prone to be good magicians, whereas other types of people might find meditation much quicker.

And a place where Wilson says he held back some of his experiences when he wrote Cosmic Trigger I: "I left out some of the more incredible things that I could have put into Trigger. "

Kudos to Dean Gengle for a good interview.