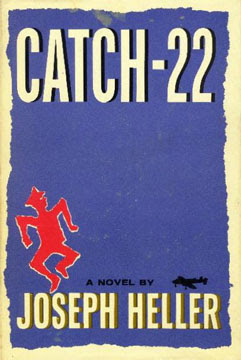 A couple of months ago, I posted about Arthur Hlavaty's new zine, Archive I: Down by the Old Slipstream, a collection of his writings about fiction that he likes. I really liked it and told you all to read it.

Arthur has now assembled a second collection of his fiction recommendations, Archive II: Back to Live, and if anything, it is even better than the first zine. Here are the first two items, on Robert Heinlein's Stranger in a Strange Land, and on Illuminatus!

Robert A. Heinlein Stranger in a Strange Land.

The satire hit me first, then the sex, then the Eastern religion. Yes, I know that it’s flawed,  but the good stuff remains. Heinlein was a  Trickster, whose two desires were to make money  and make people think. He certainly succeeded  with the latter, as far as I am concerned. (And I bought all his books.)

I may still have been sane when I finished  Stranger, so I was ready for more, and in 1975  there appeared a trilogy about sex, dope, science  fiction, alternate metaphysics, conspiracy  theory, and libertarianism/anarchism. My tastes  have changed, but then I figured that if they’d mentioned pro football, they would have had everything.

The book lived up to it: chaotic,  experimental. occasionally simplistic, but full
of the three things I most read for: people,  ideas, and laughs. As with Stranger, I reread it every year, and I still haven’t worn it down to  the parts that annoy me and “I know that.” AND ALSO Shea went on to write good, solid  historical novels with a beginning, a middle, and  an end in that order, but also with fascinating  characters and small hints of metaphysical and other weirdness. I particularly liked Shike and  All Things Are Lights. Wilson’s novels were more  like Illuminatus!, centered on initiation.  Schrödinger’s Cat was based on quantum theory, among other things. James Joyce, to whom there are many references in Wilson’s other fiction, showed up as a character in Masks of the Illuminati, which actually had a tight plot structure, along with the Wilsonian stuff.

The two archive zines and much else are available here.

Arthur should consider assembling his book reviews into a book, perhaps an ebook, to reach the people who don't follow fanzines.

UPDATE: Fixed the formatting, which I did not have time to do yesterday, and see also my post on finding free ebooks of the Shea novels Arthur recommends.
on October 17, 2018

Thanks for the plug. I may be moving towards that book thing.