A bit of Steve Fly news 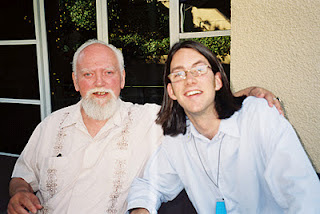 Steve Fly (when he was even younger) with Robert Anton Wilson.

Steve "Fly Agaric" Pratt has released his second newsletter to his Patreon supporters (such as me). Here is a bit of RAW news from Steve:

There are a multitude of projects in orbit right now, all directly related to works by Robert Anton Wilson, and the man himself. I'm very excited and optimistic these will all blow your socks off. I hope to revisit the website I co-produced with Chu in 2012: www.raw360.net and update one of the world’s first hand-drawn 360 degree virtual environments to include ll the fresh links.

There's also news about music, a new set of Tarot cards Steve is developing, and more.