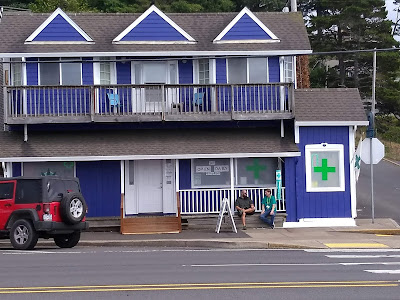 I don't like to get too political at this blog -- I strive for an "everyone is welcome" vibe, as opposed to just welcoming my own tribe -- but as Robert Anton Wilson wrote a lot about the "war on some drugs," perhaps I'm not going too far afield if I try to explain why I still think the legalization of marijuana is a good idea.

I say "still" because I've noticed a bit of a backlash recently against legalization in places like Vox.com, and in a "Marijuana in Canada" recent posting by Tyler Cowen on his Marginal Revolution blog.  Most Americans favor legalization according to public opinion polls, but apparently I'm not one of the cool kids. (That happens to me a lot).

After linking to a New York Times article which included the (in my opinion, absurd) claim that marijuana was likely to become as ubiquitous in Canadian foods as corn products such as corn syrup, Tyler wrote, "I increasingly believe that decriminalization will prove a more stable solution than outright legalization."

I link pretty often to Tyler Cowen on this blog, and I admire him as a "think for yourself" libertarian who considers the evidence and is willing to take contrarian stances, but on this issue I disagree with Dr. Cowen and believe that doctrinaire libertarians have it right.

And selling the stuff still can get you sent to jail and the penalties in many places are still unfair and enforced in a racist way. Here is a case in Mississippi that showed up in my Twitter timeline after being retweeted by Alex Tabarrok, Tyler Cowen's co-blogger.

My exposure to places were legalization has taken place is pretty limited, but I was on vacation in Oregon for a few days, where there are dispensaries, and here is some of what I noticed:

(1) When you go into marijuana stores, you first enter a small foyer, where you have to show a photo ID to prove you are old enough to get into the room where marijuana is for sale. This happened to me in two places and I'm close to qualifying for Social Security (and look it), so apparently there are no exceptions to this rule.

(2) Marijuana apparently is sold exclusively in Oregon in such places. It's not like alcohol, which  you can buy in many places in Oregon, such as supermarkets. I didn't watch much TV or listen to much radio, so I don't know if any advertising is allowed, but the impression I get is that pot isn't "in your face" in Oregon for people who don't want it. You're not going to walk by the marijuana aisle at the Safeway.

(3) We stayed at an Airbnb place and in a rented condo, both of which had "no smoking" rules but were silent on alcohol consumption. Again, the impression I get is that marijuana is legal and tolerated, but that open consumption is not encouraged. The tourist literature we sent for touted Oregon wine and beer; I don't remember seeing anything from the tourism bureaus promoting the pot shops.

(4) Marijuana is taxed, apparently generating income for public services, and apparently laboratory tested for safe use (i.e., no foreign substances, you can figure out what dose you are getting etc.)

Which of these aspects of legalization would a reasonable person object to? And why is decriminalization supposedly better?

Washington, D.C., does not allow the legal sale of marijuana, although it does allow use and possession. I recently interviewed pot historian Emily Dufton and asked how that's working out:

Q: You live near Washington, D.C., which has an unusual policy — possession and use of marijuana is legal, but sales are not. Does this rob Washingtonians of the "best part" of legalization, i.e., you can closely police whether it's sold to minors and whether it's correctly packaged and sold without funky additional ingredients?

Emily Dufton: Absolutely. I think DC has a terrible system of legalization. One quote I used in my book called it "the dealer protection act of 2015." In short, it lets most anyone get into dealing small amounts, through the "gift economy" or just through outright sales, but doesn't provide any real oversight or regulation on the plant itself. Despite legalization, consumers still have no real idea of what they're getting. Were there pesticides used? Sprays? Is there mold? Who is it being sold to? How old are they? No one knows. And with no taxes being paid on the drug, our local government isn't benefiting at all — another extension of how Congress keeps too strong a hold over the city. The DC law does allow adults to grow their own plants (some other legal states, like Washington, do not), but overall it's a mess.

No doubt one of the concerns about legalization is that it will encourage more people to use marijuana. I assume that when pot's legalized there probably would be an increase in use, mostly from people who just weren't comfortable breaking the law or who didn't have a connection with a pot dealer.

But I've also noticed the reports that sales of legal marijuana in places such as Oregon and California haven't been as large as expected. That suggests to me that most people who really wanted it were able to get it in the black market, and many of them are still doing so.

This is not to say, by the way, that Tyler Cowen isn't making valuable contributions to the discussion about substance abuse. He's been trying to point out, rightly, that alcohol is very underrated as a problem substance. I heard him say on a podcast that he has completely given up alcohol, and I'm considering that myself. I'm not a big drinker, anyway.

Frankly, if TV advertising for _all_ substances, including beer AND cannabis, was banned, I would probably be OK with that. What I want is a rational policy and a level playing field, as opposed to allowing endless TV ads for a substance that kills 88,000 Americans a year and allowing booze sales everywhere, but continuing to hassle cannabis users and treat them as criminals.

The death toll from alcohol, by the way, does not take into account the amount of crime, often violent crime, committed by people intoxicated with alcohol. Ask any police reporter, at any newspaper, about alcohol and the police blotter.

Footnote: Tyler Cowen has a new book out, Stubborn Attachments, which I have bought, just like I do with his other new books.
on October 23, 2018

Here in Colorado you see lots of print ads for pot in the free weeklies and the occasional billboard, but no TV. One of the criticisms leveled against Oregon and California's legalization is that pot taxes are too high making it far cheaper to stick with the black market.