What are the 'missing' RAW books? 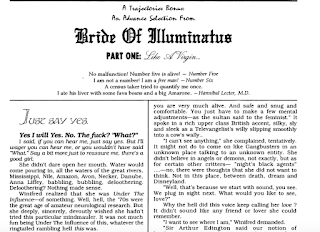 Over his long writing career, Robert Anton Wilson began or at least announced books that never appeared. I've chatted a little bit with Martin Wagner recently about this.

By my count, there are at least five publicly acknowledged  books, and I am not confident that they are the only ones.

(1) The World Turned Upside Down. In my mass market paperback of Nature's God, published by Roc, there is a note at the end about this next book in the Historical Illuminatus! series, "coming soon." There were actually five books planned in the series, but only three were published.

(2) Lion of Light, unfinished or unpublished book about Aleister Crowley that Martin reminded me of.  Here is a post about that book.

(3) Starseed Signals. This is the book that Adam Gorightly has been trying to bring out. Adam is apparently still waiting on his publisher to bring it out.

(4) Tale of the Tribe. The book about the Internet that is outlined at the end of TSOG: The Thing That Ate the Constitution.

(5) Bride of Illuminatus! The sequel to Illuminatus!, apparently abandoned after the death of Robert Shea. A bit more here.
on April 26, 2018

Bob also talked about writing a book about the anti-globalization protests in Seattle. He also told me he wanted to write a book about the influence of James Joyce on William Carlos Williams’s Paterson called “Joyce’s Voices in Jersey Verses”.

Several books were announced in a late '60s (or possibly early '70s) issue of THE LIBERTARIAN CONNECTION. I think one was called AUTHORITY AND SUBMISSION (he mentioned that elsewhere too), and I think one was called something like THE LIGHT IN THE CAVE. I believe there was a third one too, but I can't remember its title.

In conversation with RAW at Esalen in early 90s he mentioned to me that the next volume of historical illuminatus would include time-traveling (or maybe dimension traveling?) ants.

@Jesse: I think the third one was titled DEATH SHALL HAVE NO DOMINION.

Various other places:
-A model agnostic version of EVERYTHING YOU WANTED TO KNOW ABOUT SEX (I think this was mentioned in the interview with Lewis Shiner, 1988)

- a bio of Wozniak (in a letter to Kurt Smith)

-a book on Pearl Harbor

-a book on Earl Warren