More on whether RAW did the Jaguar interview of William Burroughs 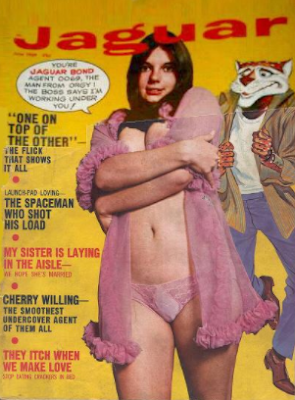 A 1969 issue of Jaguar magazine, from the Internet Archive.

There seems to be some discussion about whether the interviewer from Jaguar magazine, mentioned in yesterday's post, is really Robert Anton Wilson, so let's stay on that topic a moment.

Michael Johnson writes (comment at yesterday's blog post): "IIRC, Mike Gathers and I parsed very closely the interviewer for Jaguar (1966...so RAW either had just started working at Playboy or was shortly to begin his 5 year stint there), trying to figure out of it was RAW or not. We both thought it probably was him, based on the nature of the Qs and the style. The "right where you are sitting now" was persuasive."

RAW was fired after this Jaguar issue and started at Playboy shortly afterwards, he tells the story here: https://youtu.be/TtMCFq7_CbE?t=26m59s.
The article mentioned in the clip is available at RAWilsonfans: The Anatomy of Schlock. Jaguar was published by Myron Fass.

After his time at Playboy, there were also RAW contributions in the men's magazines San Francisco's National Ball / San Francisco Ball (Kerry Thornley and Camden Benares were regular writers for the underground sex paper) and in The New Swing.

... and in Oui and Gallery, most of them are available at RAWilsonfans.

Jesse Walker makes the Jaguar interviewer RAW into a 99% probability for me here.

Off-topic, but last week I was reading in Joseph Campbell's _The Inner Reaches of Outer Space_ and happened on this bit:

"Thus a mythology is a control system, on the one hand framing its community to accord with an intuited order of nature and, on the other hand, by means of its symbolic pedagogic rites, conducting individuals through the ineluctable psychophysiological stages of transformation of a human lifetime - birth, childhood and adolescence, age, old age, and the release of death - in unbroken accord simultaneously with the requirements of this world and the rapture of participation in a manner of being beyond time."
-p.xxiii

We can read this as a "glass half full" variation of what WSB and RAW saw as word-made metaphorical human constructs that imprison our full potentials, but a fuller reading of Campbell suggests he's sympathetic to the gnostic views of RAW and WSB and words/metaphors and systems of social control so prevalent most people never even "see" them.

Also NB: Campbell's use of the term "framing" and Lakoff's work.

Finally: was WSB's master trope - that words are a virus from outer space that have found a perfect host in the nervous systems of humans - a precursor to Dawkins's "meme" thing? WSB studied directly under Korzybski and I can't help but think this "infection" idea from words was influenced by Korzybski. The theory of the cut-up/fold-in method was a further method of self-defense. RAW used cut-ups and all of Korzybski's extensional devices plus AK's student David Bourland's logical extrapolations from AK: E-Prime.

All of this in the name of Liberation from the historical social construction of the Black Iron Prison.

RAW was fired after this Jaguar issue and started at Playboy shortly afterwards, he tells the story here: https://youtu.be/TtMCFq7_CbE?t=26m59s.

Oh, how I wish I had encountered that interview when I'd been writing United States of Paranoia. Paul Krassner had told me that Playboy had hired RAW after spotting the anti-Hugh Hefner article he'd written for The Realist some years earlier. This seemed dubious, like Bob was pulling Paul's leg, but I mentioned it in the book, albeit with a caveat. It of course makes much more sense that they would have approached him after seeing the "A. Nonymous Hack" piece instead.

(Of course, after finding out who "A. Nonymous Hack" actually was, they then may have encountered the anti-Hefner piece as well. Perhaps Krassner was conflating two different parts of the tale when recollecting all this years later.)

The funny thing is, that "The Anatomy of Schlock" appeared in Sept '65.

The funny thing is, that "The Anatomy of Schlock" appeared in Sept '65.

That's probably explained by long magazine lead times, and also possibly by the Burroughs interview getting bumped forward an issue or three after Wilson was fired. (That might also explain why he wrote up the profile separately for Fact—he might have despaired of the Jaguar version ever seeing print. Speaking as a magazine writer myself, I know the feeling.)

Also, The Realist at various points in its history appeared later than you'd expect from the date on the cover. I don't know offhand if that was a problem in the mid-'60s, but I'll note that ordinarily an issue dated September would come out in August—yet the September 1965 issue begins with several articles on the Watts riots, which didn't happen til August was halfway over.

Do you have any other 1965-66 issues of Jaguar, Martin? It would be good to check the mastheads to see when he worked there. (Also, someone needs to track down his ESP columns for Fass's tabloid. Any idea which paper he wrote those for? I'm guessing The National Mirror.)

Sorry, Jesse. I don't have more issues of Jaguar, also no idea for which paper he wrote the columns.

There's a RAW contribution in the Jaguar Nov '65 issue: "Notes on the Arts", RAW reviews Norman Mailer and Max Stirner (... maybe this was too in­tellectual).

And one of the three pulps mentioned in the "The Anatomy of Schlock" article was PHOTO aka PHOTO magazine, published by Tempest Publications Inc., New York (I don't know, if this was one of Fass's company names). "Wild Sex Freaks of History" by RAW appeared in the Dec '65 issue and "Girls Who Suck You Dry" in the Aug '65 issue.

Any idea which paper he wrote those for? I'm guessing The National Mirror.

Martin: FWIW, I'm not sure that's Wilson writing that ESP column, since it's from 1967—i.e., after he left for Playboy. Could be someone else continuing the column.

I know, Jesse :)
... The National Mirror seems to be the tabloid in which RAW wrote his ESP columns before he left New York sometime in 1966.