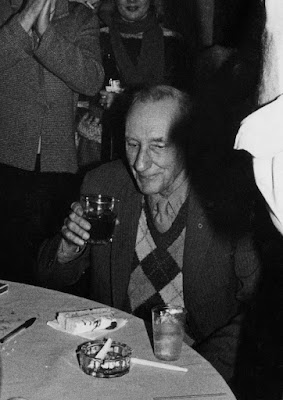 On Twitter, Jesse Walker highlights one of the important discoveries of Martin Wagner's Cosmic Trigger Companion (which I wrote about the other day): An interview with William Burroughs by Robert Anton Wilson.

Here is a section which would seem to have had a big influence on RAW:

(After RAW has asked about Burroughs cut-up techniques)

Burroughs: "I think if a writer is not endeavoring to expand and alter consciousness in himself and in his readers, he is not doing much of anything. It is precisely words, word lines, lines of word and image and associations connected with these word and image lines in the brain, that keep you in present time, right where you are sitting now."
on April 28, 2018

IIRC, Mike Gathers and I parsed very closely the interviewer for Jaguar (1966...so RAW either had just started working at Playboy or was shortly to begin his 5 year stint there), trying to figure out of it was RAW or not. We both thought it probably was him, based on the nature of the Qs and the style. The "right where you are sitting now" was persuasive.

In the Bibliography of Interviewers, the Jaguar interviewer is only called a "staff reporter."

This interview is collected in a wonderful fat book titled _Burroughs Live 1960-1997: The Collected Interviews of William S. Burroughs_, edited by Sylvere Lotringer and published by Semiotext (E). And it's arranged in chronological order, with an index, 845 pages. The Jaguar/RAW interview is on pp.92-95.

RAW later co-edited of _Semiotext (E) SF_, with Peter Lamborn Wilson and Rudy Rucker. RAW's in that is a WSB-influenced cut-up, "Project Parameters in Cherry Valley by the Testicles." RAW uses parts of his HIC series as cut-up material.

Sylvere Lotringer also included RAW's "experiment" with Finnegans Wake, an essay titled "Coincidance", which is a precursor to what later appeared in the book by the same title. RAW uses the sigla and it seems to me even more avant than the wildest bits on FW in _Coincidance_. Or rather, it's a concatenation of RAW's riffs on FW that link it to - seemingly - "everything." This piece is found in _Semiotext(E) USA_, pp.155-188. At one point, the piece runs along the top of page after page, while an essay by Paul Virilio runs along the bottom for a few pages.

When I talked with Burroughs on 10/23/83 I mentioned Wilson, but I couldn’t get Burroughs to talk very much.