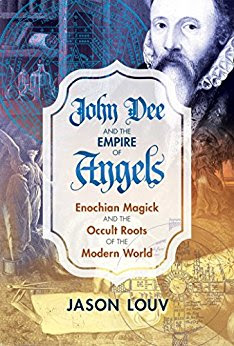 Jason Louv of Ultraculture has a new book out, John Dee and the Empire of Angels: Enochian Magick and the Occult Roots of the Modern World.

The book has picked up some nice endorsements from the likes of Douglas Rushkoff and Mitch Horowitz.

Rushkoff: "John Dee is the original Elizabethan mage-scientist, who invented the British Empire and invested it with magical power. He is to Elizabeth what Merlin was to Arthur, except he was real. Here’s the original technology of weaponized memes, psyops, and empire building in a gripping, authoritative account of how and why we became an occult society.”

Horowitz: “Any biographical treatment of John Dee must be nothing less than epic--and Jason Louv has gloriously achieved this in John Dee and the Empire of Angels, a truly comprehensive, broad-spectrum, and lavishly beautiful historical study of the master magus and the counter-current of secret history Dee launched into the world, which has affected us all.”

On Twitter, Horowitz also wrote, "A truly epic work of historicism on John Dee from @jasonlouv. I cannot imagine it being surpassed. Part of the renaissance in occult letters."

Eric- Frances Yates was a huge influence on my formative years. I was just talking about her analysis of Durer's Melancholia yesterday. She was an amazing scholar and I think one of her books is on the works cited page of nearly every paper I wrote in undergrad.

I'm excited Dee is getting some much deserved attention. Alan Moore's unfinished libretto for his unfinished Dee opera in Strange Attractor 4 is some of his best writing.