More accounts of the KLF in Liverpool 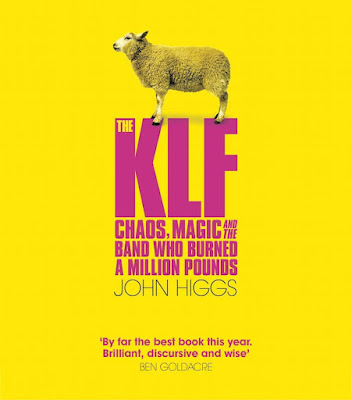 I have been waiting for a concise, journalistic account of what went on in Liverpool, and I've finally found one: A dispatch in The Australian. (If the link doesn't work,  Google the terms "The Australian" and "KLF" and "Profits of Doom." Apparently if you try to read an article more than once, they demand a paid subscription.)

With the help of a burly bouncer type — he turns out to be Tony Thorpe, the rapper on the KLF’s 1988 stadium-rave classic What Time is Love? — Drummond, 64, and Cauty, 60, push through the crowd and take their places at the back of the bookshop, not to sign copies of 2023, but to stamp them. Drummond’s stamp has a skull encircled by the words “Day of the Dead”. Cauty’s has the Starbucks logo augmented by “War is Over”. Neither says a word. My attempt to talk to the pair, or, failing that, to antagonise them by taking a selfie is met by a stern rebuke from Thorpe, who tells me to “Show some respect, yeah?”

Also, John Higgs has given an interview to Mondo 2000 about the event.

I don't know if I missed a great event or if I should be pleased I couldn't make it, but I sure like the book Higgs wrote about the pop/art duo.

Email ThisBlogThis!Share to TwitterShare to FacebookShare to Pinterest
Labels: John Higgs, The KLF