Douglas Rushkoff on 'Aleister and Adolf' 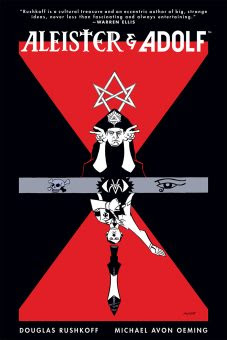 I got two interesting comments in response to Thursday's post referring to Douglas Rushkoff's new graphic novel, Aleister and Adolf.

Michael Johnson pointed to a Dangerous Minds interview of Rushkoff by Richard Metzger. It includes this bit:

Aleister & Adolph reminds me a lot of Robert Anton Wilson’s Masks of the Illuminatus—which I think is his best book—because it sort of forces its ideas into the reader’s head like an earworm that you can’t resist. Also Crowley is a character in that book, too, of course. Do you see it as a bit of a RAW homage?

Douglas Rushkoff: It’s a RAW homage in that the story has verisimilitude—it is told in a way where it’s absolutely possible for this all to happen. There’s no supernatural magic here; it’s just the magick of Will. There’s the black magic of the Nazis. But however extreme the Nazis, it was real. It’s got the reality quotient of Eyes Wide Shut or Apocalypse Now.
And that’s the understanding of sigil magic I got from Bob. It’s all very normal. That doesn’t mean it doesn’t work. Just that you have to participate in its perception. It’s just a different way of understanding the connections. So while the protagonist of the story starts off as a disillusioned atheist and ends up believing in magick as Magic, even Crowley (at least my Crowley) tries to convince him not to take it so literally.

I wouldn’t understand magick that way if it weren’t for Bob. It’s embedded in the fabric of reality. It doesn’t need to break the rules of reality to work.
on August 06, 2017