The musician Ott on his favorite RAW books 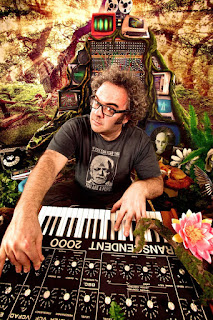 FAN: Just began reading my first Robert Anton Wilson book and it seems I run into one of your song titles every 50 pages or so :) but my question though is which of his books would be your top 3 favorites?

Ott responded on 01/13/2012
OTT: It's hard to put them into order of preference because a lot of his books feel like the same thread of writing spread over several volumes.

The one which had the most profound effect on me was 'Prometheus Rising' but that is because it was the one I read first. It introduced me to the concept of 'tunnel reality' and the power of semantics and I vividly recall the sensation of consciousness expansion that occurred two chapters in. It was as life-changing as any of my other psychedelic experiences, and possibly more than most.

'The Illuminatus' is important as a demonstration of the concepts outlined in his non-fiction works and I make a point of re-reading it every couple of years. It reminds me not to take any of 'this' too seriously.

Equal third place goes to 'Schrodinger's Cat', 'Cosmic Trigger' and 'Right Where You Are Sitting Now' for coming along exactly when I needed them.
on August 12, 2017