Cauty and Drummond release their novel 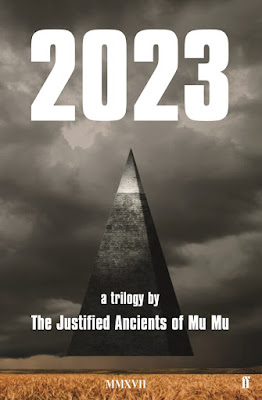 The new novel by the "Justified Ancients of Mu Mu," i.e. Bill Drummond and Jimmy Cauty of KLF fame, 2023: A Trilogy, has just been released, and it appears to be kind of what one might expect: A rather slavish imitation of the Illuminatus! trilogy. Here is some of the description from an article in the Guardian:

"It is a multi-layered, self-referential meta tale, starting with two undertakers, Cauty and Drummond, who discover a life-changing book called 2023: A Trilogy on a hotel bookshelf. It was written by “George Orwell”, the pseudonym for one Roberta Antonia Wilson, 33 years ago .... It is a tale which switches between the diary of the author, Roberta, in April 1984, and her fictional novel set in 2023, in the tax haven of Fernando Po, which is the last nation state on earth (on a small island off the coast of Africa)."

The Guardian has "an exclusive extract from the KLF's chilling novel about the world in 2023," and it's more of the same:

There are some who have decreed order is the natural order of not only the human condition but of everything that has ever existed and is ever likely to exist.

And there are those who have proclaimed chaos is the natural order not only of the human condition but of everything that has ever existed and is ever likely to exist.

Winnie is thinking it would be great if there was a secret society that actually controlled everything. And if that was the case, there could be another organisation that could attempt to undermine it all. Be at war with the Illuminati. An eternal war. She reads more of these pages. It seems there is another organisation called The Justified Ancients of Mummu who do just that. They exist to undermine the Illuminati and spread chaos in the world. They are called The JAMs for short.

Needles are being stuck into leaders, a squirrel is leaping about, and in other ways the opening of Illuminatus! is evoked.

The most amusing aspect of the article is that all of this is reported by the Guardian's writer, Hannah Ellis-Petersen, without any references to Illuminatus!, Robert Anton Wilson or Robert Shea. Admittedly the source of inspiration may not be as obvious as, say, a novel about a boy wizard in an English boarding school, but you'd think someone writing for the Guardian would be willing to do a little research.

The book has been released in the U.S. as well as Great Britain, so I guess I have to decide whether to read it.
on August 23, 2017

Email ThisBlogThis!Share to TwitterShare to FacebookShare to Pinterest
Labels: The KLF

I have it on order Tom so I'll let you know.