The connection between Hitler and the occult 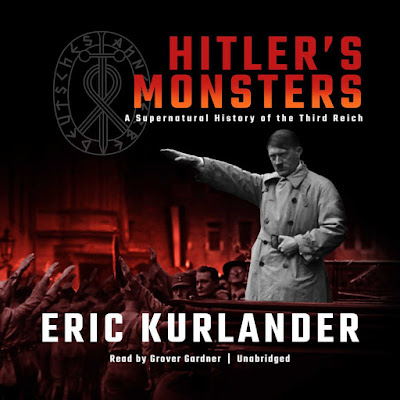 "Whether you learned about it from watching “Raiders of the Lost Ark” or, even earlier, from reading Louis Pauwels and Jacques Bergier’s European bestseller “The Morning of the Magicians,” who doesn’t now know that Hitler and Nazi Germany were obsessed with the occult?"

The Morning of the Magicians is mentioned in Illuminatus! which devotes considerable attention to the connection between the Nazis and the occult. If you think Wilson and Shea made all of that stuff up, check out Dirda's review of Hitler's Monsters: A Supernatural History of the Third Reich by historian by historian Eric Kurlander.

Lots of other interesting sentences in Dirda's piece; here is another one: "The psychologist Carl Jung would even assert that Hitler was a medium, a 'mouthpiece of the gods of old'.”

If you don't know him, Dirda is a Pulitzer-prize winning critic who loves science fiction, fantasy and horror and who is quite familiar with Robert Anton Wilson and Discordianism.  Read my interview with him.
on August 03, 2017

Douglas Rushkoffs new graphic novel Aliester and Adolph sheds some light on this subject as well. It asserts that the "V for Victory " campaign was essentially a counter sigil against the Nazi swastica. And it was none other than Crowley who came up with the V sigil. "✌️" Get it? The Nazis were well aware of this kind of Magick and the British decided to bring in the best man for the job to counter their Magick, The Great Beast 666 Himself.

In this interview Rushkoff says _Aleister and Adolph_ is a RAW homage:
http://dangerousminds.net/comments/aleister_adolf_douglas_rushkoff_on_his_new_graphic_novel_crowley_and_magica