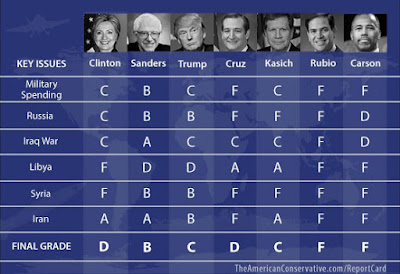 The American Conservative has issued a report card on foreign policy,  judging the candidates on peace issues; for a full report on each candidate, go here.  (Don't be fooled by the word "conservative" in the name of the magazine; to paraphrase RAW on libertarians, they are not "that kind" of conservative.) Hat tip, Jesse Walker.

I covered Bernie Sanders when he campaigned in Ohio, in the city where I live; he pretty much didn't talk about foreign policy.