The most important book you haven't read? 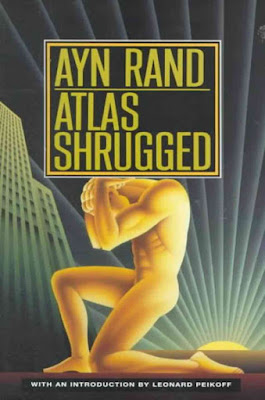 Here's an interesting question for all of you book people out there: What is the most important book you have NOT read that influenced your life? The question is posed by Tyler Cowen, who suggests that readers avoid the obvious answer of the Bible or the Koran.

When I thought about it, I decided the answer for me is Atlas Shrugged by Ayn Rand, which I have avoided reading for more than 30 years. (I did read an excerpt once in another Rand book, For the New Intellectual, which is the only Rand book I have read (and that was many years ago.)

I have connected to libertarians in some fashion or other for decades. (Even this blog counts, although rather to my surprise the readers are not dominated as much by libertarians as I would have assumed.) Most people come to the libertarian movement from reading Ayn Rand, particularly her signature novel, as this book title suggests.  So it seems to me that a large number of people have been brought into my life by a long novel that I've never attempted to read.

I would say the Odyssey and the Iliad. I've read parts of each but I've never finished either of them. I came heavily under Ezra Pound's influence in 1983 (due to Robert Anton Wilson's writings). Pound suggested that no adequate translation of Homer existed in English, so that along with my natural laziness led me not to finish reading Homer.

Tom: Knowing your particular brand of left-leaning libertarianism, which I like to think I do, I believe you might appreciate Fountainhead more.

I loved Fountainhead and Atlas both, but FH definitely resonated with me more on a philosophic level. The main theme of FH, in my view, is individualism triumphing over forced collectivism. And the story was fantastic, IMO.

Atlas is a good fictional introduction to libertarianism, but I think a more advanced libertarian will tire of the constant portrayal of "Business Good, Government and Slackers Bad" without much further nuance.

I've yet to read Darwin's _Origin of Species_ all the way through. The section on the labor theory of value in _Kapital_ I've always skipped in and over.

No doubt there are others, but when I read the Q those were the first books I thought of.

Eric's answer made me think of RAW's take on translation. RAW admired Pound for just about everything except his racist cranky craziness. (<----and it's considerable, no doubt) If we take a look, for example, at _The New Inquisition_, p.13, we see RAW thought all translations were suspect, because of his Sapir-Whorf-Korzybski-etc hypothesis about the fundamental untranslatability of one language to another: each language evolved in such a way that some sort of uniqueness within its structure. However, RAW knew that Achilles Fang thought Pound's translations of Confucius - without really knowing Chinese! - captured the gist of Master Kung better than English translators who knew Chinese. How does someone pull that off?

Pound's notions of the way Chinese worked as a grammar were wrong; his interpretation of how ideograms worked changed English "licherchoor" and influenced Modernism is a major way.

RAW's ideas about translation didn't stop him from reading Homer. Or Ovid. I do know Arlen read French, so when RAW wanted to read something in French Arlen read it to him. I doubt all French texts RAW read were read to him by his wife, but she did help him with stuff that had to do with the Priory of Sion, and IIRC, some background research for the Historical Illuminatus! Chronicles.

Richard Kostelanetz remarked on Pound's effective "nonliteral" translations. And not only Pound, but Crowley and Leary seemed to have made nonliteral translations. W.V.O. Quine is a good High Kulch guy to read on the basic untranslatability of language from one to another; there's always creativity and choice on the part of the translator. Getting back to RAW: even when reading in English, from a book written in English, his theory of reading was the author and reader "co-create" the text. Every book reads differently, because of the irreducibility of the reader's private psychological states.

Read HOMER! Eric: when I read you hadn't read Homer I said to myself, "Do'OH!"

There have been many more adequate translations of the Iliad published since Pound offered his highly biased opinion. Try Peter Green's recent heavily annotated version. http://tinyurl.com/zmtd4yu An even newer one by Caroline Alexander has just been published in the U.S. http://tinyurl.com/jgs7a4y To appreciate it fully READ IT ALOUD.

Michael, I have begun Robert Fitzgerald's translation of the Odyssey.

In 1967 I loved the TV show "Eighth Man". The android on that show used the name Tobor (robot backwards).

Finnegans Wake
While I have read & enjoyed many of the books mentioned by RAW, FW has eluded me. Even with the assistance of reference books, guides and annotations, I am unable to read it in the same way that I would be unable to read a book written in any other foreign language. Part of me is convinced that it is truly a great practical joke while the other part of me feels intellectually inadequate to the task. Maybe someday ...
Scott in Wisconsin