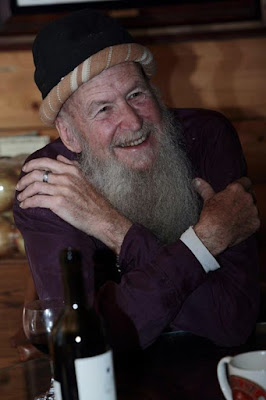 My favorite hippie physicist (and maybe yours) is Nick Herbert, who is mentioned in Cosmic Trigger: The Final Secret of the Illuminati, and who, as I have mentioned, has a blog.

Dr. Herbert had a recent blog posting I particularly liked, about a Taoist he knew for years, Gia-fu Feng, who did a best selling translation of the Tao Te Ching, and who helped Fritjof Capra get the Tao of Physics published.

Gia-fu enrolls at the Wharton school in Philadelphia but, becoming increasingly disoriented by American culture, he "hops in an old jalopy" and wanders across the United States, a trek which eventually leads him to San Francisco where he finds a position with Alan Watts at the American Academy of Asian Studies both as student and translator. Arriving in the midst of the San Francisco Renaissance, Gai-fu becomes friends with writers Alan Watts and Jack Kerouac, poets Lew Welch, Gary Snyder and Lawrence Ferlinghetti, and other talents, among them fellow student at the Academy and future cofounder of Esalen Institute, Dick Price.

Herbert's blog post was prompted by the discovery that a woman named Carol Ann Wilson wrote a biography of Feng, Still Point of the Turning World. One more book for me to try to get around to reading.

Better, read Gia-fu's translations of Laoze and Chuangze. Jane English's accompanying photographs say more about the Tao than any words ever can.

Photographs can't speak of tao. The gurus have been stripped. People are challenged to find their path and be authentic in this century.
http://www.strippingthegurus.com/

A philosopher maybe on the right track. This does not mean we should follow them right off the rails.