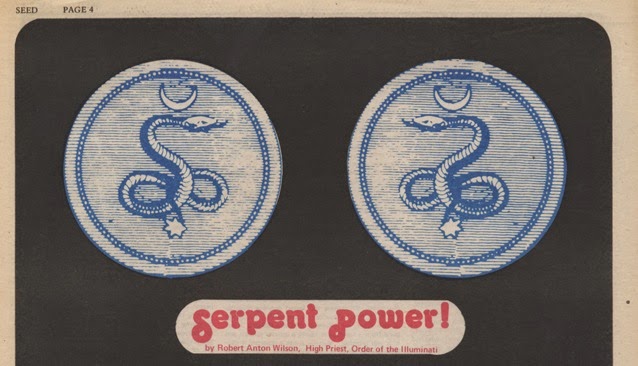 Apparently it is easier to murder people if you dehumanize them. That applies to armies killing whole groups of people, but also to individuals, as Shea and Wilson show.


When George Dorn, stung by the accusation that he is not a real revolutionary, follows the police officer, intending to kill him, he reminds himself that the officer is not a real human being. "I  followed the cop -- the pig, I corrected myself -- out the cafeteria .... I let the cop -- the pig -- get half a block ahead, and reached in my pocket for the revolver." (page 228.)

But did you remember who the police officer was? Shea and Wilson already have identified him: "and George Dorn, who once wanted to shoot him, is still screaming" (page 13.) And Shea and  Wilson, on the same page, had taken care to humanize him: "His name is James Patrick Hennessy and he's been on the Force for three years. He doesn't come back into this story at all. He had a five-year-old retarded son whom he loved helplessly; you see a thousand faces like his on the street every day and never guess how well they are carrying their tragedies."

Note that the God's Lightning folks in this passage are not capable of seeing the demonstrators as human beings. (They also know nothing about their supposed religion. A more darkly ironic method of killing and injuring people cannot be imagined than using crosses; the incident with the money changers excepted, Jesus is usually described in the New Testament as a pacifist.)

Along with violence in this 10-page section of the novel, there is also sex, or rather sex  magick, the Illuminati secret that RAW discusses in Cosmic Trigger I. "And the real symbolism of the pyramid is alchemical of course," Simon says on page 226, explaining the matter to Joe Malik. The passage refers to "eternal serpent power." For more on serpent power, see this PDF of RAW's article for Chicago Seed.  (I am still very pleased that I tracked that down back in 2011 and bought a digital copy to share with you; it's one of RAW's better articles.) For more on the symbolism of the eye in the triangle, see page 778 in the appendix.

"Don't you read your  Mao, George? Enemy attacks, we retreat." (Page 228). Mao Tse Tung's famous description of how to fight guerilla warfare: "The enemy advances, we retreat; the enemy camps, we harass; the enemy tires, we attack; the enemy retreats, we pursue."

"I pull the trigger and fall, with the explosion, into blackness." (Page 229.) Reminiscent of RAW's attempted suicide on the Brooklyn Bridge, described in Cosmic Trigger II, in which he is saved by a different fluke -- he pauses to read an incription and realizes the mistake he is making.

George is undergoing an initiation similar to the one Hagbard Celine will later give Harry Coin, except that Hagbard knows what he's doing.

p.227: "Maybe he was just a cheap thief who was trying to pick the kid's pocket. A lot of that goes on these days,too." - seems to have alchemical implications as in minor distractions that try to rob energy, etc.

Great write-up, Tom! Speaking of eternal serpent power and the Illuminati Secret RAW writes of in CT1 recalls hearing a recent internet rumor that the Illuminatti are recruiting. They need more Illuminati and Illuminatus! tells you how. Maybe this book functions as a clandestine (or not so clandestine) recruitment algorithm?

p.229: the AUM concoction: Hagbard thinks it yields "constructive gullibility." In _Sex, Drugs and Magick_, p.22, RAW's discussing the historical horrors of blind faith and "rigid dogmatism" and writes, "My basic attitude has always been that the greatest drug any chemist could possibly invent would be an anti-gullibility pill, to cure humanity of its addiction to faith and dogma."

A note or two on Clem Cotex.

When I first encountered Clem I was sure the name was taken from WSB, but WSB's guy was "Clem Snide," a character who appeared in Naked Lunch, a couple of the Nova Trilogy novels, and the cosmic detective reappears in WSB's stunning phanopoeic _Cities of the Red Night_.

Pynchon's _The Crying of Lot 49_ has a "Stanely Koteks," who felt the Military-Industrial Complex was squelching individual liberties, initiative, and rewards.

Clem Cotex is a re-occuring character in Right Where You Are Sitting Now and the SCT. he morphs into variations of satirical figures. In Universe Next Door he's "W. Clement Cotex," an "eccentric millionaire" who's also an "intellectual surrealist." - not exactly the Clem we see here, a God's Lightning dupe from Little Rock.

In _The Homing Pigeons_, Clem programs himself into "the head space of the First Bank of Religiosophy and tells Blake Williams that "money is the Schrodinger's Cat of economics."

Another version of Clem shows up in RAW's "Dirty Socks and Denture Breath," which may or not be up at RAWilsonfans.com

Pg. 228. The activation syndrome, Skinner calls it - BF Skinner shows up later through grafitti. In Cosmic Trigger RAW called him Tim Leary's "Arch rival" pg. 37.
Pg. 231 - RAW and SHEA's infamous "die Morgensheutegesternwelt" - looks like there is some Illuminatus! fan fiction here: http://archiveofourown.org/works/300735/chapters/481537
Most of page 233 sounds plausible, does anyone have a source to back it up?

Die Morgensheutegesternwelt: the yesterday/today/tomorrow world? RAW loved alternative perceptions of time. Certain drugs will do it, and there's almost an "exercize" feel to the idea of doignwhat Bucky Fuller did: wear three watches, p.231, to obtain a deeper understanding of relativity.

The German word, while long, seems to be a word that comes from a culture that conceptualizes "reality" different enough to have that word - my admittedly Whorfian view - while ours doesn't. As Prof. George Carlin wondered, "how come we don't have a word for 'the day before yesterday?'"

The Qs about evidence of the Holocaust not being believed is in innumerable books on the Nazis and the FDR admin. The other day I watched a doc on Netflix, "Imaginary Witness: Hollywood and the Holocaust," which covers some of that ground. I've become quite cynical about power politics, but even I can't get myself to believe that FDR and his Brain Trust heard/read/saw some evidence of mass exterminations - Vernichtung - and said to each other, privately, "Well, that's pretty rotten, but what're ya gonna do?" I can get myself to believe they suspected that something epically horrible was going on, but thought they couldn't get in to stop it until first this, then that...

Thanks for the information Michael. It's not something I've looked into. I think there might be some other sections on the same subject later in the book too.

I just watched the 1948 film "The Naked City". It has a homicide cop named Muldoon who says, "This is a heavy case." I wonder if this film and/or the TV series it inspired influenced the Muldoon character in Illuminatus!

Mike, the "constructive gullibility" on pg. 229 seems similar to Bob's ideas about metaprogramming. A friend of Arlen's once said of Christian Science that CS works if "you're stupid enough to believe in it."

Bob said Crowley taught one how to enter these belief systems but not remain stupid.

Zen without Zen Masters has a parable about how a spiritual leader got started because of his gullibility.

The fast intercutting on page 230 reminds me of the end of Intolerance.

The line about five or six years after 1969 on pg. 231 supports the idea that the main action of the novel takes place in 1976.

p. 230: "But you'll have to die, really die, man, before you're illuminated." He smiles gently. "Aside from death and resurrection, you won't find anything you would call 'supernatural' with this bunch. Not even a whiff of old Chicago-style Satanism."

In alchemy it gets called "solve coagula," the death and rebirth trip. Lots of death in this part of the book, alchemical or otherwise which, of course, means bardo adventures!

p. 231 - time anamolies accompany visionary states sometimes. To move out of the rigidity of consensual, Newtonian, mechanical clock time into an experiential awareness of the relativity of time and various anomalies vis a vis clock time = moving out of Leary's 4 terrestrial circuits into post-terrestrial domains.

p. 232: The paragraph that starts "Like tomahawks..." gets very violent, qabalistically reflecting the war-like aspect of Geburah, the 5th Sephira. The following paragraph introduces Jesus, in what seems an English extrapolation of Hebrew, "Yeshua ben Yosef" which I think is the first introduction of Jesus as a human being in the book. Jesus obviously indicates Tiphareth, the 6th Sephira. Not only does it preview the next major qabalistic transition in Illuminatus!,it also suggests the magickal formula 5 = 6 sometimes graphically represented as a pentagram = a hexagram (ie a Star of David). The pentagram indicates a WoMan who has balanced their own nature leading and cohering with Spirit, while the hexagram symbolizes a "god" who has harmonized the lower nature from below with the Divine nature pouring in from above. Also, the unification of the microcosm with the macrocosm. This intercut also contrasts War with an archetype of Peace ie Jesus, as Tom pointed out.

The Hebrew transliteration of Jesus makes me think of how current violent world events seem to fit right in with this chapter of Illumnatus! In the news yesterday, the 23rd day of fighting in Gaza, the US announces that it's sending more ammunition to Israel. I'm hoping they'll send some advisers along to show the Israeli army how to aim their fucking weapons! They're supposed to be getting bad guys, right? I advise the Bob Newhart method for ending pathology and neuroses of all kinds which is just to "STOP IT!"

Here's the full clip which is pretty funny:
https://www.youtube.com/watch?v=Ow0lr63y4Mw

But, it's not all bad news on Urth. Hilary Clinton revealed on Fareed Zakaria last weekend that Vaclav Havel told her it was the influence of Western culture that kept the movement going which eventually ended the Cold War. No word on whether Illumnatus! had an effect, they didn't get into specifics, but I think it likely it made it's way over there. Art can change the world, it seems.