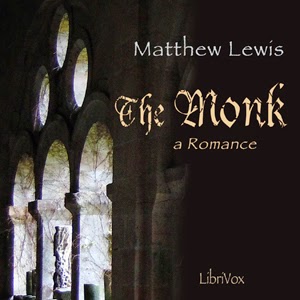 Some years ago, when everybody else was was reading it, I read Dan Brown's The Da Vinci Code. It was pretty ridiculous, but it had an uncanny ability to keep me turning the pages to find out what was going to happen. (RAW fans will recall that the main source material for the book also was used in RAW's earlier novel, The Widow's Son. Dan Brown's lawyers apparently missed the chance to use The Widow's Son as part of their defense in plagiarism trial.)

A few days ago, British writer Sean Gabb talked me into reading The Monk by Matthew Gregory Lewis. I asked Dr. Gabb why he listed Lewis as one of his favorite writers, and he replied, "The Monk is a gloatingly lurid tale of lust and horror. Lewis was seventeen when he wrote it. I was that when I read it. Unable to put it down, I took it into an A Level Mathematics exam. Dickens and Wilkie Collins much admired it. My mother read it some years back, and was surprised when I showed her the publication date."  So I read it (or more precisely, listened to the free LibriVox audiobook, ably read by James K. White.) I thought it was ridiculous, but I was hooked. I had to keep going to find out what would happen to its poor, tormented characters.

From what I gather, from reading about it and from an amusingly rude introduction by a Mr. E.A. Baker from the edition that White apparently used, Monk took the elements of a Gothic novel and turned it into a lively page-turner with plenty of sex, violence and grotesque horror.

It apparently wasn't terribly original, but as Brenton Clutterbuck observed in a blog posting that I wrote about a couple of days ago, originality isn't always rewarded. After Wilson and Shea built up the Bavarian Illuminati mythos in Illuminatus!, "This mythos would appear to have gone on to influence the modern pop-cultural idea of the Illuminati, from books such as Umberto Eco’s conspiracy classic Foucault’s Pendulum  to the pop-culture runaway successes of Dan Brown’s novels The Da Vinci Code and Angels and Demons, and the film adaptation of Lara Croft: Tomb Raider, though Wilson’s influence is seldom credited."
on July 11, 2014

Email ThisBlogThis!Share to TwitterShare to FacebookShare to Pinterest
Labels: Sean Gabb, The Monk