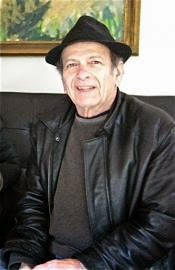 Michael Johnson has a blog post up on archives of famous writers and artists, and as usual, his post was interesting.

His topic this time raised once again in my mind something that I've blogged about repeatedly (for example here): where are Robert Anton Wilson's archives? Where are his papers, his unpublished manuscripts? For me, the Holy Grail is the long correspondence he carried out with Robert Shea. In Cosmic Trigger III, he said he hoped it would collected together and published someday. So where is it?

Robert Shea's survivors have answered my emails and told me that he didn't leave much in the way of papers behind, certainly not boxes and boxes of RAW correspondence.

I've had less luck communicating with RAW's people, but Discordian historian Adam Gorightly apparently communicates them and is the maintainer of the Discordian Archive so I thought I'd ask him.  Adam, who had mentioned in an earlier email that RAW was not very good about maintaining his papers, replied to me (April 10 this year), "No idea about Shea RAW correspondence. Like I said it doesn't seem that RAW did a good job of saving a lot of stuff. Greg Hill was unique because he saved not only the letters he received, but also made copies on the letters he sent."

Maybe that ends the matter.

In his post, however, Michael links to an article about the struggle to preserve the Timothy Leary archives,  which at one point had been seized by the federal government. (Michael Horowitz, pictured above, worked hard to save it.) In a comment below his original blog post, Michael then talks about RAW's papers (or lack of them) and suggests that RAW's behavior might have been informed by his close friendship with Leary and knowing what had happened to his friend:

The Leary/Horowitz story I linked to may have made RAW extremely guarded about his archives, to whatever extent they existed: the idea of gvt thugs trumping up some reason to confiscate his personal papers may have been too much, so whatever archives there are were a big secret while he lived; I don't know. I may be projecting here.

There's a lot more to Michael's comments; he notes a mysterious RAW interview which hints of a possible secret RAW archive. So go read his post.

Even if no stockpile of RAW papers ever turns up, I should note that the situation is not hopeless. He published many books, wrote many articles that remain uncollected in his books, gave many published interviews and wrote many letters, more of which will likely turn up and become available. The Discordian Archives contain quite a bit of RAW material (some of it reprinted in Gorightly's new Historia Discordia book.) And there likely is good stuff buried somewhere in the Leary papers, now safely housed at the New York Public Library. It would also be nice if someone could share as much as possible of RAW's email correspondence, and if RAW's online postings for Maybe Logic Academy could be compiled.

[UPDATE: Speaking of archives, when I was researching a blog post on an unrelated matter today, I noticed that the Robert Anton Wilson Fans website was down. I contacted the guy who hosts it, Joseph Matheny, who told me he had noticed it, too, and it should be fixed soon.]