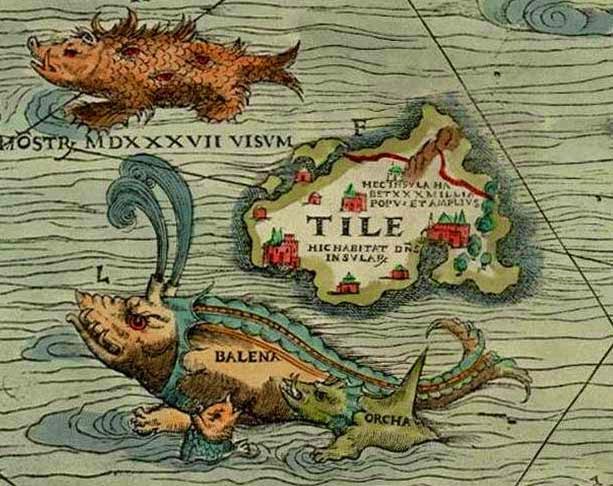 The mythical island of Thule on the Carta Marina.

(This week: Page 214, "In the distance, George could make out what appeared to be a mighty city rising on hills," to page 224, "Soon we must to Bavaria go. Ewige Blumenkraft!")

What do you get when you link Nazis, the occult and the Cthulhu mythos? A vivid few pages of Illuminatus!, for one. The political point is that the state is depicted as many-tentacled being, insatiable for slaughter.

Some of this is tied together in the form of Karl Haushofer. I have not had time yet to read The Morning of the Magicians, mentioned previously in this blog, which details the alleged links between the Nazis and the occult,  but the Wikipedia entry on Haushofer certainly shows that much of the odd stuff about him in Illuminatus! (pages 218-219) seems to have a basis in fact. The Thule Society was a real group, and some of the facts about them constitute a gift for SF and fantasy writers who want to be "out there." Apparently the actual influence of the group is disputed, but there seems to be general agreement that on many points, Thule Society ideology and Nazism coincide.

Some notes on the text: "And when the throne room was empty," page 216, completes the story of the hoax Hassan imposes  on his followers on page 141, the beginning of the Fourth Trip. A pretty good hint by the authors that not everything they write is meant to be taken seriously.

The Honest Book of Truth, written by Kerry Thornley and reprinted in Adam Gorightly's new book, Historia Discordia. Also quoted at the very beginning of Illuminatus!

Hermann Rauschning, a real person. While the authenticity of his Hitler memoir is disputed, apparently the odd anecdotes recorded by Wilson and Shea are in the book. More on Nazi occultism.

"You don't have to believe in Santa Claus," H.P. Lovecraft explains, page 220. According to the L. Sprague de Camp biography of Lovecraft, Lovecraft gave up believing in Santa Claus at a very young age and also soon became an atheist.

"The pilot was another Captain Clark," I can't find anything to confirm this oft-repeated tale. The only New York to Miami Eastern airlines crash I can find has none of this stuff.

Pg. 217. Swift-Kick, Inc. This is explained a bit later.
Pg. 219. The book "Theory of Games and Economic Bahaviour" seems to have been a favourite of RAWs as he mentions it in various books.
Pg. 219 "THIS IS THE VOICE OF YOUR FRIENDLY NEIGHBORHOOD SPIDER MAN SPEAKING. YOU MUST REALIZE THAT YOU ARE NOT JOSEPH WENDELL MALIK." - This always confused me, does anyone know what is happening in this scene, and who is talking?

p.215-216: August Personage, about to leave the phone booth at the Automat on Fortieth Street and the Avenue of the Americas ..."

"It was the Five of Pantacles."

Interesting qabalistic image for the transition from Chesed to Geburah. 40 = Mem = Water. Chesed = a Water region. 5 of Pentacles indicates the earthy nature of Geburah. In the Thoth tarot that card gets called "Worry" and can represent a material crisis.

Of course, interesting qabalistic imagery indicates multiple meanings. Avenue of the Americas is the official name for a street New Yorkers know as 6th Avenue renamed in 1945 to celebrate Pan American relations.

Geburah's English name = Power so it seems most appropriate to begin the chapter with a summation of Hitler's rise to power. They have him saying almost right away: "During the period of my struggle for power..." The Hitler section ends with "...in 1923. Shortly thereafter, Hitler made his first bid to seize power."

Then we get what I find a genius transition to the protests at the Chicago DNC in '68. This implies the fascism of Hitler carries through to the Chicago police. The authors also seem to place two culturally opposite archetypes side by side - Hitler, the ultimate war-mongering despot cuts to an archetypal event of the Anti- War movement and then goes all psychedelic and non-linear with it after indicating "No rational explanation..."

All the War Gods get assigned to Geburah so it seems synchronous that war takes center stage in the world news this week with the shooting down of the passenger jet, and the invasion of Gaza as the Illuminatus! reading moves into Geburah.

p. 222: paragraph that starts "A swarm of men..." contrasts war-like behavior with the anti-war statement in front of the UN Plaza. Multiple meanings here, check 777's List of Primes - perhaps related in imagery to "Mothers March Against Polio" mentioned the page before in Simon's letter if you follow this drift.

p.223: from "Misunderstanding, my eye!..." to "...OR WE'LL STOMP YOU" continues this drift which might get called "too much testosterone."

I don't know about the Captain Clark that Burroughs heard about. Yesterday, July 23rd, I started rereading The Weapon Shops of Isher by A.E. van Vogt only to find out that one protagonist is named Fara Clark. His wife yells at him early on: "You handled him wrong. He's twenty-three and you treat him like a child. Remember, at twenty-three you were a married man."

https://www.youtube.com/watch?v=TXmLjbTBcdU The discussion of tenderness on page 215 made me listen to Otis Redding's "Try a Little Tenderness." I also enjoy the Irish version in "The Commitments."

Fuzzbuddy, the voices saying, "YOU ARE NOT JOSEPH MALIK" seem a foreshadowing of the deprogramming of George Dorn in "The Homing Pigeons."

The references to the little man on page 217 suggest Wilhelm Reich. I highly recommend the film "Conspiracy" about the Wahnsee Conference and the planning of the Holocaust.

@ Eric Wagner: Rebecca Goodman's line "not an embellishment..." p.215 is straight out of Reich's Function of the Orgasm, so reference to his little man theory a few pages later appears sequentially. Also, nice O.R. track!

Must be appriciated for the article.
DspzxWx