Hugh Crane (Twitter account here) sent me some photographs of the first issue of Gallery magazine, a Playboy imitator, and there are some interesting RAW features. 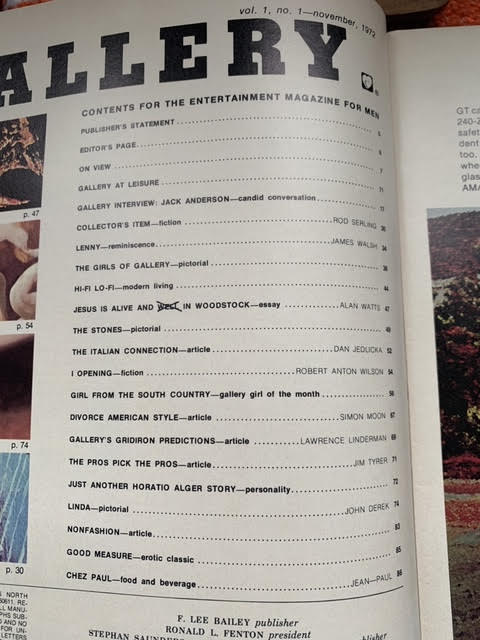 Table of contents. Notice contributions from both Robert Anton Wilson and Simon Moon. 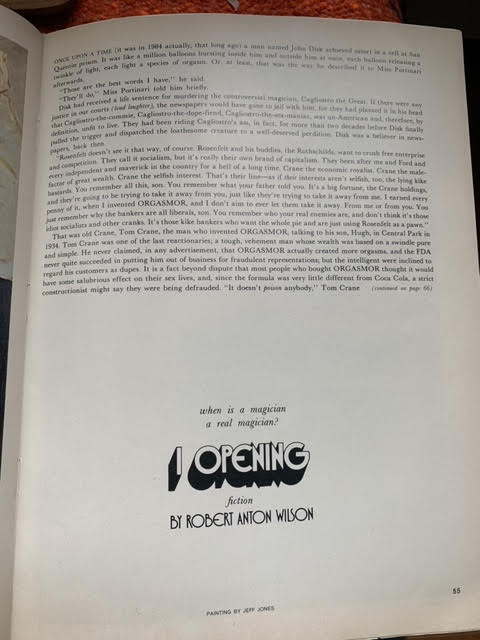 The RAW story in the issue, "I Opening." Here is my information about the story: "I Opening is all the Hugh Crane/Cagliostro content from Schrodinger’s Cat condensed into a short story. RAW changed the story a little for the book, including a different ending where Crane’s death is a mystery." You can read the text of the story. 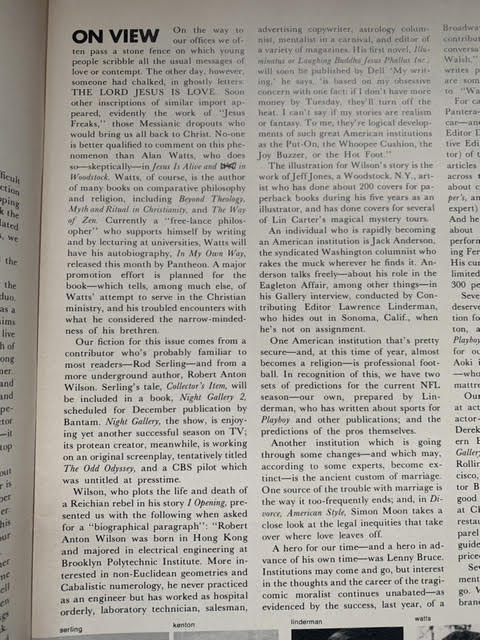 Page with RAW's contributor's biography. It says, "Wilson, who plots the life and death of a Reichian rebel in his story I Opening presents us with the following when asked for a 'biographical paragraph.' 'Robert Anton Wilson was born in Hong Kong and majored in electrical engineering at Brooklyn Polytechnic Institute. More interested in non-Euclidean geometries and Cabalistic numerology, he never practiced as an engineer but has worked as hospital orderly, laboratory technician, salesman, advertising copywriter, astrology columnist, mentalist in a carnival and editor of a variety of magazines. His first novel Illuminatus or Laughing Buddha Jesus Phallus Inc. will soon be published by Dell. 'My writing,' he says, 'Is based on my obsessive concern with one fact: if I don't have more money by Tuesday, they'll turn off the heat. I can't say if my stories are realism or fantasy. To me, they're logical developments of such great American institutions as the Put On, the Whooper Cushion, the Joy Buzzer, or the Hot Foot." 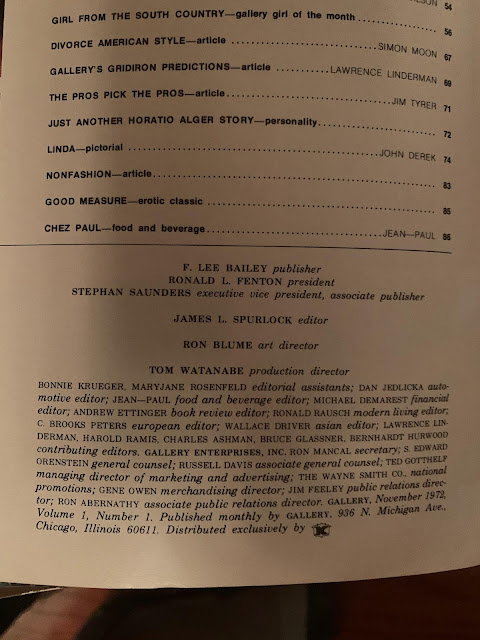 The masthead; I did not see names that were familiar to me.
Related: Supergee on the connection between men's magazines and Wilson and Shea.

The masthead; I did not see names that were familiar to me.

Thanx for the plug

I Opening is one of the few short fiction pieces I've found floating about the Wilson corpus. The Simon Moon piece can be found here: http://rawilsonfans.org/divorce-american-style/

Posted from Iain Spence:
It would be nice if Hilaritas could do a print volume of these obscure articles/stories. Like the stuff from Gnostica magazine...it would be handy and fun to have print volumes to read. It's odd how I relate differently to print on the screen and to print on paper. I much prefer paper. Maybe younger people aren't so fussed.
Alan Watts on Jesus Freaks looks interesting. I'm sure RAW covered the topic with humour in Sex & Drugs at one point.