A few notes on 'Starseed Signals' 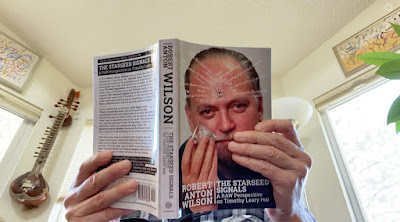 Rasa (I assume) checking out The Starseed Signals. Note the sitar on the wall, which Rasa plays for his band, Starseed.

The centennial of Timothy Leary's birthday yesterday was marked in all kinds of ways (thanks again, Eric, for that piece) but for many of us the big news was the official announcement of the publication of The Starseed Signals -- Link Between Worlds: A RAW Perspective on Timothy Leary PhD.

1. Given that the book would have been lost otherwise (RAW did a terrible job of taking care of his papers) we all owe a debt of gratitude to the people who preserved it and other documents in the Discordian archives: Greg Hill, Dr. Bob Newhart and, in particular, the current keeper and custodian, Adam Gorightly. It was Adam who discovered The Starseed Signals and brought it to light. I want to be sure and thank Adam.

2. Rasa and his helpers worked hard to prepare the book from RAW's manuscript, and there are lots of nice extras, including Rasa's "A note from the publisher" piece at the beginning on the history of the manuscript, John Higgs' typically thoughtful introduction, two interviews of Leary by RAW and correspondence between RAW and Gregory Hill.  (Careful readers of this blog probably knew before almost anyone else that Higgs wrote the introduction for the book, see this interview, third answer.)

I don't know all of the details yet, but I know a lot of work was put into preparing the book, including working with amoeba on the cover, copyediting done by Charles Faris and Iain Spence, gracious assistance from Adam Gorightly (who did not, after all, get the chance to bring out his own edition of the work), even help on a point of physics from Nick Herbert.

3. For further background on the history of Starseed, see Adam Gorightly's "lost" forward to the "lost" edition of the "lost" book.

4. As with many of the official announcements from Hilaritas, perhaps the best part is Christina Pearson's latest RAW memoir. This time, we get a great Leary anecdote and some candid information about the Wilson family at the time the book was written. So check out the announcement, if you haven't seen it yet, and sign up for the Hilaritas Press mailing list.

5. In his introduction, Higgs says of the book (and the time it was written), "This was not Leary's finest hour, and neither was it Robert Anton Wilson's." Probably best not to raise expectations too high for a book that RAW himself did not attempt very vigorously to sell to a publisher, but the writing comes from probably my favorite period of RAW's writing life, the middle period, and I am very excited to have it. Don't look for a review from me anytime soon, however; I plan to read it slowly, probably a chapter a day. (I read Chapter One Thursday night and enjoyed it.)

Is it or will it be available on paper? Barnes & Noble lists only the NOOK book

Rasa says it will be available on paper soon at all retail outlets.

As I write this, our distributor, Ingram, is in the process of making the print edition available everywhere, but because of the pandemic, everything they've been doing has been drastically slowed down. We should not find it too weird that Amazon seems to have no problem with having the print edition in stock. Because Amazon is, well, Amazon, and bigger than the actual Amazon, they have a special relationship with Ingram, the largest book distributor in the country. Giants play nicely together, it seems.

Also, I really appreciate the back cover genre choices by Hilaritas. Model agnosticism, guerilla ontology. Interested to see what Natural Law will be labeled.

Another great work accomplished, thanks for all the time and effort from all parties. Each and every new edition from Hilaritas brings new heads into orbit with the work. A toast t that.