Tim Leary had a profound influence on Robert Anton Wilson. Recently I read a bit from his early book Interpersonal Diagnosis of Personality and from his late book Surfing the Conscious Net. Man did he go through some changes. I also read a bit from Robert Greenfield’s rather hostile biography. I glanced at some relatively recent articles about Leary online. I don’t think any of them captured the unique intelligence I have gathered from Leary’s books. My favorite take on Leary comes from Bob Wilson in the piece “Lighting Out for the Territory” in Beyond Chaos and Beyond. I remember loving that piece when it first appeared in Trajectories in 1996 shortly after Tim’s death.

I heard Tim speak seven times, and I got to talk with him a few times. We never hit it off, but he still had a great effect on me. 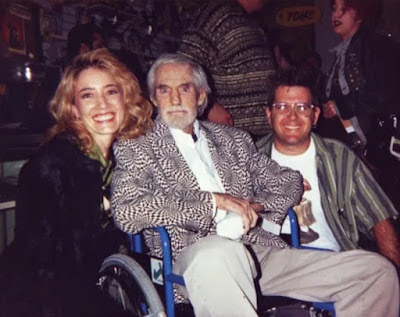 Boing Boing also is marking today's centennial of Timothy Leary's birth. This 1995 photo of Leary with Carla Sinclair and Mark Fraunfelder is from one of the posts.
on October 22, 2020

When the heck is the Errol Morris Showtime doc on Leary dropping?!

A film by Errol Morris or My Psychedelic Love Story.