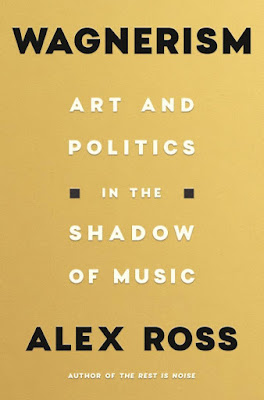 I love classical music, and I'm a fan of Alex Ross, the "New Yorker" music critic and the author of several books on classical music (I haven't read the new one yet, on Wagner and his music.) So I looked forward to his interview by Tyler Cowen.

I enjoyed it, but when I checked out the transcript, I was surprised to see that a couple of the questions and answers might interest sombunall of you. Here they are:

COWEN: What’s the best Orson Welles movie and why?

ROSS: My favorite is Touch of Evil. I don’t know if I’d necessarily call it “the best” in terms of sheer technical accomplishment. Citizen Kane will always be remarkable because that’s the movie where he had the most resources and the most control.

But I just absolutely love Touch of Evil, taking this rather seamy, sleazy genre picture and investing so much weirdness and darkness and slyness and menace into it — I think it’s an astonishing achievement. I get this visceral pleasure out of watching it every moment. It’s wildly entertaining and also, I think, rather deep in terms of how it talks about power and his character, the policeman who frames the guilty man. [laughs] It’s a wonderfully complex problem that it poses for the audience.

COWEN: Did writing a thesis about James Joyce at Harvard at all influence your music writing and how you approach music?

ROSS: Oh, sure. Joyce was one of the most musical writers who ever lived, a fine singer, a very acute listener, a very comprehensive knowledge of different eras of repertory going back to the Renaissance. Joyce cultivated a taste for me. I fell in love with Joyce, and Ulysses in particular, before I really got to know the classic works of the 20th century. I read Ulysses at age 18. At that stage, I was still struggling to come to terms with Schoenberg and Stravinsky in the early 20th century.

Ulysses gave me a taste for a kind of sprawling, comprehensive, all-devouring . . . it’s not strict and spare and disciplined modernism. It’s the modernism of all-engulfing chaos. And in music, that happens to be a mode that I’m quite fond of, whether it’s the symphonies of Charles Ives or Bernd Alois Zimmermann or certain later 20th-century composers.

So yeah, Ulysses, I think, influenced my listening and prepared me for unexpected and perhaps irrational juxtapositions of different styles.

More here.  By the way, the Metropolitan Opera has been offering free nightly streams and next week is Wagner week.

One more point. When Cowen announced he was going to interview Ross, he invited readers to suggest questions in the comments. My question didn't make the cut, so I wrote to Ross and posed the question myself, and he was nice enough to write back:

I very much enjoyed your recent interview by Tyler Cowen, and I am a fan of your books.

Before he did the interview, Tyler solicited possible questions on his blog. He didn't use my question, which is fine, but I was hoping I could email you and ask my question, anyway.

I am a big fan of 20th century Russian composers, particularly Prokofiev and Shostakovich. But I also spend a lot of time listening to early Gavriil Popov, Alexander Mosolov, Nicolai Myaskovsky and Nikolai Roslavets. My question is, do you think the Russian Futurists such as those last four are neglected, and deserve to be better known? I know you have written about Popov, at least.

Thanks for the note, Tom! Yes, I believe those composers deserve much wider exposure. I think that the Popov First Symphony is one of the great 20th-century symphonies, and it obviously had a huge influence on Shostakovich.
All best,
Alex

Thank you for sharing this. I enjoyed Ross's "The Rest Is Noise". I have contemplated getting his book on Wagnerism. The Joyce community has had a lot of discussion of the Joyce material in the book. Joyce had mixed feelings about Wagner. He said he disliked Wagner's music, but he went to see performances of Wagner's music dramas and operas whenever he had the chance. He also included tons of references to Wagner in his writings.

I also find it interesting the huge impact Wagner had on Joyce, Proust and Musil. Wagner permeates Proust. In fact, one might see the Ring as a model for Proust's gigantic novel.

Cool stuff, Tom, thank you. This book from Alex Ross has been getting tons of positive press.