Return to blogging about Twin Peaks 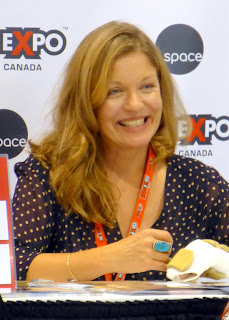 I am still surprised no evidence has surfaced that Robert Anton Wilson watched Twin Peaks, or was interested in it; there are so many reasons why I assume he would have liked it -- the artistry, the surrealism, the occult aspects.

Laura Palmer haunts the third season much like she haunted the first two seasons; there are flashback scenes but also new scenes filmed by actress Sheryl Lee.

Here is one of those silly synchronicities I like to share. Just after I finished the third season, we got an advertising magnet in the mail for a local insurance agent, one of those things people send you hoping you will stick it in the fridge and call them.  The name of the blonde insurance agent was Jennifer Palmer.

My wife gave me the magnet, remarking that the blonde lady obviously was Laura Palmer's daughter. Actually, it's a better coincidence than my wife realized; The Secret Diary of Laura Palmer, a tie-in book connected to the original series, was written by Jennifer Lynch, David Lynch's daughter.

I enjoyed the third season very much, while wondering what the heck somebody would make of it if they had not seen the original series; has anyone reading this had that experience?

One of the pleasures of the new series is that many of the original characters return, and you get to see what have become of them 25 years later. Lynch also indulges his interest in music and there are many complete performances in a bar, including one great scene when a folk singer performs and the viewer suddenly realizes it's a famous rock star. (Well, I'm sure many fans knew who it was right away, but I didn't until I heard the distinctive voice.) Some of Lynch's greatest surrealistic images and scenes appear in the series. Lynch directed all of the episodes and I had the feeling Lynch took his time to do the series his way. The series was announced in 2014 but didn't air until about three years later.

One of my favorite episodes was Number 14, and I was startled to notice Beatles references in it. There's a scene where James Hurley, a character from the original series now apparently working as a security guard, hears a story from fellow guard Freddie Sykes, an Englishman, that explains why Freddie came to Twin Peaks. At about 38:26, Sykes describes "waking up the next morning" when he "got out of bed, dragged a comb across me head, went downstairs and had a cup," before saying, "Just kidding about that part!" He's quoting from the Beatles' song "A Day in the Life," but stops  before the line, "Somebody spoke and I went into a dream."

The connection between the Beatles and dreaming recurs a few minutes later, when Laura Palmer's mother walks into a bar, which is named the #9 Bar, recalling both "Revolution Number 9" but also John Lennon's solo hit, "#9 Dream." a song which supposedly came to Lennon in a dream.

I probably shouldn't drag John Higgs into this blog post, but in my Beatlemania, I like to believe that everyone in England has only one degree of separation, at most, from a Beatle, and Mr. Higgs proves my ridiculous delusion "is" "true."

If you do watch Twin Peaks, don't forget to read Gregory Arnott's article on the show.

Great post! I just put the Twin Peaks soundtrack on Youtube. I don't know of Bob watching Twin Peaks, but during its original run my friends who loved Bob Wilson tended to love Twin Peaks. Those pre-DVR days seem so long ago, staying home on Saturday nights to watch Twin Peaks. A video store where I worked in the 90's had a number of Twin Peaks obsessed employees, and we put up promotional material from the VHS releases around the store and discussed the blue rose cases from the movie.

Tim Leary loved Lynch's Blue Velvet. I had ballet teacher who would loudly say, "HE SAYS HE GONNA DO A CARD TRICK!"

Oh yeah, I saw Lynch's Inland Empire in Santa Cruz the night before Bob Wilson's Memorial BBQ in 2007. the next day I would meet for the first and so far only time Michael Johnson, Mike Gathers, Christina Pearson, Richard Rasa, and Bobby Campbell.

And Brian Shields. Brian and I discussed using astral projection to participate with Tim Leary in the Millbrook Obesity Program. We also discussed Beethoven and wondered which recording of Beethoven's Ninth Bob favored.

@Eric, should I figure out a way to watch Inland Empire? It doesn't seem to be currently available for streaming.

Eh, I found it mildly interesting. I don’t have the passion for Lynch’s work I once had.