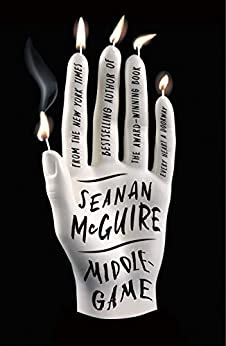 I have been reading the novels on the Hugo Awards final ballot, and I very much enjoyed Seanan McGuire's Middlegame (I was unfamiliar with her work before). It's a long fantasy novel with a complex structure. Many of the sections are out of order chronologically (it starts with a scene that finishes toward the end of the book) and there are excerpts from a fictional children's book that seems at first to have little to do with the main narrative. It all comes together wonderfully and in fact it's a gripping read -- it was a compulsive reading experience. Along with a couple of other nominees, it would be a fine winner.

But I also mention the book because there are details at the end that are either a nice, subtle shout out to Robert Anton Wilson fans or just meaningless coincidences. The climactic scene takes place on June 23. (All of the scenes are carefully dated.) It takes place on a farm in rural Ohio (RAW once lived on a farm in Ohio, as Christina describes in in the just-issued Hilaritas edition of The New Inquisition.) One of the main characters is Erin -- one letter removed from "Eris" obviously -- who is blonde and beautiful, as Eris is usually depicted by modern artists. Erin is the embodiment of order but her ability to resolve a key crisis depends upon the fact that she can recognize chaos, because once she was paired with it.

By another synchronicity I just finished reading a chapter in a book about coincidences. Scott Adams' book Loserthink: How Untrained Brains Are Ruining America is a self-help book purporting to show how dumb ways of thinking hold people back. I'm enjoying the book. Chapter 8 has a section on most coincidences are meaningless and you shouldn't put any stock in them most of the time:

Coincidences happen all the time. But we humans are wired to put meaning on coincidences, and when we do we are often engages in loserthink.

To be fair, sometimes coincidences do mean something. If the police are investigating a domestic murder, and the surviving spouse booked a flight out of the country right before it happened, that might not be a coincidence at all. But the far more typical situation is when we think a coincidence means something and it doesn't. We are surrounded by coincidences. Most mean nothing at all.

Chapter 8 in Adams' book is called "Thinking Like a Scientist." Although it probably means nothing at all, I am also reading The New Inquisition by Robert Anton Wilson. It's all about how sombunall scientists engage in a kind of "loserthink" and cites the existence of synchronicities as an example of some scientists excluding evidence outside of their reality tunnels.