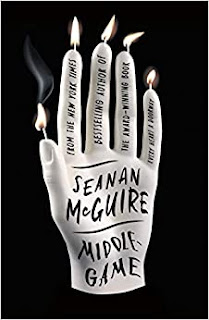 I'm "attending" this year's all-online World Science Fiction Convention in New Zealand and for the first time in many years I have read all of the novels on the Hugo ballot (I'll vote in as many categories as I can become well informed -- the deadline is July 15.)

The Best Novel finalists -- six novels, all by women -- is a very strong collection of titles. I'd be happy to see an award go to any of my top four; I am particularly hoping the Hugo goes to one of my top two. Here are my rankings:

An utterly absorbing fantasy novel about artificially created twins, a young man very good with words and a young woman good at math and chess. Unusual and complex but very well put together.

Galactic empires are not a new subject, but this novel, by a historian of Byzantium, focuses not on the military but on the cultural hold an empire such as the Roman Empire has on is neighbors. I liked this novel so much I gave myself a name according to its naming system: Eight Apricot.

Like the McGuire, this has a book within a book, and in fact it's an extended metaphor on the idea of books as gateways into other worlds. A fresh and vivid first novel.

Muir is from New Zealand, but this nomination does not seem like home cooking; it's an original and vivid book that earns its nomination. It revives the sword and sorcery genre, although the elements of horror are so vivid you might not notice at first. The ending seemed a bit force and unsatisfying to me.

5. The City in the Middle of the Night, Charlie Jane Anders.

A vivid depiction of an unusual world with excellent aliens. I did not think the narration worked particularly well as a story, and for me it didn't so much end as peter out once a book length had been reached. This just won the Locus Award, however, so many readers disagree.

This title, kind of a mash up of The Forever War and Slaughterhouse Five, did not work particularly well for me.