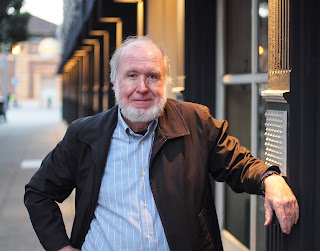 Kevin Kelly, the tech guru and Wired magazine founder, recently celebrated his 68th birthday by offering "68 Bits of Unsolicited Advice."  I thought it was good advice, but as a RAW blogger, this caught my eye:

"• The universe is conspiring behind your back to make you a success. This will be much easier to do if you embrace this pronoia."

This seems rather similar to Robert Anton Wilson's saying, "You should view the world as a conspiracy run by a very closely-knit group of nearly omnipotent people, and you should think of those people as yourself and your friends."

I thought maybe RAW had originated the concept of pronoia, but this Wikipedia article cites others, including John Perry Barlowe, who defined it as "the suspicion the Universe is a conspiracy on your behalf."

Pronoia Is the Antidote for Paranoia: How the Whole World Is Conspiring to Shower You with Blessings by Rob Brezsny, a 2005 book, cites RAW as one of the progenitors of the concept.
on May 10, 2020

Bob coined the similar word metanoia. I heard him use it in the late eighties.

Many people have used that quote online: "You should view the world as a conspiracy run by a very closely-knit group of nearly omnipotent people, and you should think of those people as yourself and your friends."

And it’s even been cited in books without the details of WHICH book (or which interview?), much less which page.

I have been trying to find out which RAW's book is the quote from. Do you or anyone else on this group know ?

@Eric, Wikipedia says "metanoia" is an old word used in the New Testament; how did RAW use it?

@Branka, Beats me; I'm hoping someone can help.

I'm not sure how RAW used the word metanoia but my understanding is that it originally meant change your mind or heart but the translators of the bible from the Greek turned it into repent.

RAW defined metanoia as the opposite of paranoia, the model that universe conspires to help you.

Here is something sort of like that quote, from the Conspiracy Digest interview reprinted in The Illuminati Papers:

"Besides, paranoia is a Loser Script; it defines somebody else as being in charge around here except me. I prefer to define myself and my friends as the architects of the future."

Also in the same book: