RAW on 'fakes' and 'real' things 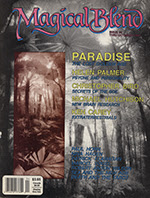 "The Imaginary Mongoose," another Martin Wagner rediscovery, is Robert Anton Wilson's article about F Is For Fake and what "is" "real."

Andy Warhol, as is well known, used to keep a pantry full of Campbell soup cans, and if he liked you, he would autograph one and give to you, so you could own “a genuine Warhol original.” Such is the magic of art and the art of magic. The logical next step, as Hugh Kenner once pointed out, would have been for Warhol to sue the Campbell Soup Company for selling cheap imitation Warhols.

I have pondered long and hard, for many years, on the difference between “real” money and counterfeit money, and the best analysis I can offer is that we are supposed to believe the wizards at the Federal Reserve Bank have a magic wand which turns paper into something of value, but the counterfeiters do not own the magic wand. This can hardly be called fakery or imposture (despite the grumblings of some right-wing money cranks) since the Fed’s notes are indeed accepted as something valuable on international money markets.

But why would a dollar become worth several million dollars if it were hung on a museum wall by Warhol as an example of “found art?” And would it make any difference if such “found art” were blessed by the wizards at the Federal Reserve or just printed in a basement by the Mafia?

Maybe humans are creatures who create realities out of the flux of experience by faking (imposing?) meanings and forms. Or is that too Buddhistic a view for most of you reading this?

RAW also writes, "As for me, I’m already wondering if this is a genuine Robert Anton Wilson article or just another fake I dashed off because I was too tired to write the real thing."

Interestingly enough the Brattle Theater in Cambridge Massachusetts is showing F is for Fake as part of its week-long screening of a new movie about Orson Welles titled The Eyes of Orson Welles. From the blurb:

Visionary cinema historian Mark Cousins (The Story of Film: An Odyssey) charts the unknown territory of the imagination of one of the twentieth century’s most revolutionary artists. Granted unprecedented access to hundreds of sketches, drawings, and paintings by Orson Welles – tantalizing, never-before-seen glimpses into the filmmaker’s rich inner life – Cousins sheds new light on the experiences, dreams, desires, and obsessions that fueled his creativity and inspired his masterpieces.

I’ll be attending the showings on Thursday June 27. If anyone is local to the area and wants meet up to check it out let me know.