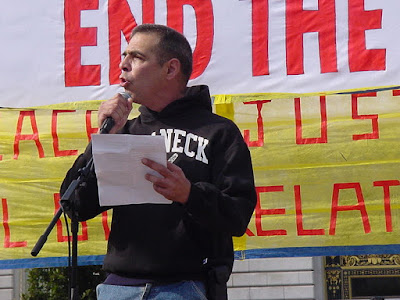 "There is no place in the libertarian movement for the War Party and its minions." -- Justin Raimondo. (Public domain photo taken in 2007).

This was originally going to be a "No war with Iran" posting (given Robert Anton Wilson's antiwar views, I don't see that as off topic) but Thursday night I learned that Justin Raimondo, a co-founder of Antiwar.com, had died after a long battle with cancer.

You can read the antiwar.com obituary.  Scott Horton already had done a podcast.

Jesse Walker comments, and this witty Tweet from Angela Keaton is so true.

With Justin gone the rest of us have to raise our game, and the looming possible war with Iran seems like a good time to do so. You can read a good piece by David Stockman on antiwar.com. I also recently read a good Andrew Bacevich piece.

I loved him for his years of trying to keep America out of Asian wars, but I wish he had managed it without becoming Buchanan fodder.