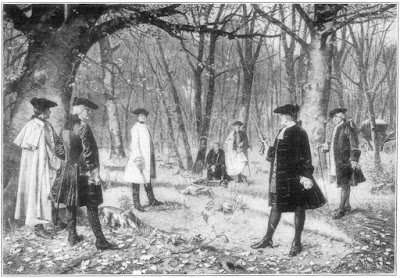 The duel between Alexander Hamilton and Aaron Burr, fought with pistols.

This week -- the final week -- goes from page 359 ("The light was far, far away at first, but it approached at a dazzling speed.") to the end of the book. Then we take a break for a few weeks until Gregory Arnott begins leading the reading group for The Widow's Son in August.

There's a lot in this final section about the "fourth soul." Dustin had an interesting comment in the last blog entry: "When Sigismundo thinks about the vegetable, animal, and human souls my mind translates it into the first three systems within the eight system model. However, the descriptions of the fourth soul do not seem to align with the social-sexual system to me. Sigismindo describes the fourth soul as I AM. Maybe the fourth soul lumps the higher circuits, oops systems, together?" I am not an expert on the eight circuit model; what say the rest of you?

Dueling was of course still a thing in the eighteenth century, and RAW does a good job of depicting the stupidity and destructiveness of it. Perhaps the most infamous duel in American history was that of Alexander Hamilton and Aaron Burr, which killed Hamilton. Hamilton's son, Philip, also died in a duel.

While Sigismundo is studying music theory in Paris in 1770, Mozart, age 14, is touring Italy. It was this year that the incident occurred in which Mozart heard Miserere by Gregorio Allegri in performance at the Vatican and wrote it down from memory.

As this is the last blog entry, I want to thank everyone who took part, either by posting a comment or simply by stopping by to read an entry.
on June 24, 2019

Re Dustin's comments: Yes, I think the Masons in this book lump the higher circuits together much as Bob in Prometheus Rising suggests Jung does. Sigismundo's awakening of the fourth soul in this week's section has elements of the morphogenetic system on pg. 360: " Animals, fish, plants, stars, lattices, energies; melting, flaming."

Pg. 361 - the discussion of birdsong makes me think of the music of Messaien.

Pg. 362 - Bob liked the line in the film "They Might Be Giants" that the Garden of Eden stills exists, all around us, all the time.

Pietro has reached the age of 59 in this novel. I met Allen Ginsburg and Robert Creeley at the Ezra Pound Centennial in Maine in 1985 when they had both reached the age of 59. I found myself thinking about this watching Ginsburg in the new Dylan documentary on Netflix. I first read The Earth Will Shake in 1983 at the age of twenty, a bit older than Sigismundo. I reread it today at the age of 57, nearly as old as Pietro (or Ginsburg or Creeley when I met them).

The snow falling on the last page reminds me of the ending of Joyce's "The Dead".

Thank you for leading this journey, Mr. Jackson. I have enjoyed it.

"The Earth Will Shake" begins with Sigismundo experiencing death firsthand and concludes with him confronting the real possibility of his own death in a duel. Despite drinking copious amounts of wine, this tragic possibility sobers him up enough for him to remember his magick exercises with the result of going into an ego-less ("There was no Sigismundo again" p. 361) altered state of consciousness that reminded me of what John Lilly calls the state of High Indifference.

Pietro remembers a key line for times of crisis:
"My habits will carry me through." p. 367 This comes from E.J. Gold's "Voyager's Quatrain" from his book "Life in the Labyrinth":

I watched "They Might Be Giants" about 3 days ago with my girlfriend for her to see it. I highly recommend it. The body typing this has been around for 59 years. I experienced many synchronicities connected with this reading group. Though this seems par for the course with RAW material, it never ceases to amaze me. For example, when questioning the so-called Masonic pyramid a couple of weeks ago, a relatively small pyramid (about 5 feet high) inexplicably turned up at a rural intersection I drive past every day.

I liked the line: " ... and the University of Paris was said to have one of the best Natural Philosophy departments in the world" p. 376 Gilles Deleuze taught philosophy at a University in Paris when RAW wrote those lines.

Thank-you, Tom, for hosting this discussion. I believe these group readings significantly contribute to RAW's legacy. I look forward to the next one.