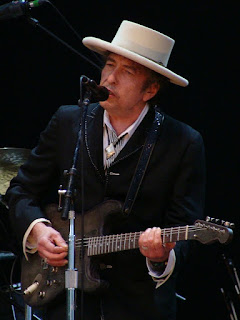 Boing Boing has an interesting post, "When William S. Burroughs met Bob Dylan," about a writer who Robert Anton Wilson admired (Burroughs, of course) and a singer-songwriter RAW unfairly dissed.

The blog post is an excerpt from a new book by Casey Rae, William S. Burroughs and the Cult of Rock 'n' Roll.  The book claims that Burroughs' cut-up prose technique influenced Dylan's lyrics, and that the "Brother Bill" mentioned in the Dylan song "Tombstone Blues" is a reference to Burroughs.

Note: Netflix has begun airing a new movie, Rolling Thunder Revue: A Bob Dylan Story by Martin Scorsese, a fictionalized account of Dylan's 1970s tour airing on Netflix. Allen Ginsberg, a poet much admired by RAW, apparently is featured in the film.
on June 12, 2019

That “unfairly dissed“ link is awesome Tom. Thanks for that!

Some critics are saying that Rolling Thunder is Scorsese’s best film of the century. I’m eager to see it.

Great post! I didn't know about this meeting before. I knew Dylan got strongly influenced by Kerouac and Ginsberg so figured Burroughs must have as well. Also thought the "Brother Bill" lyric referenced Burroughs. Though not well known, Paul McCartney used to collaborate and experiment with Burroughs' tape recorder experiments when he lived in London.