'Waging Peace from the Inkbattle House: Finnegans Wake in the Shadow of War' 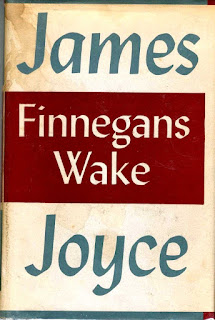 A natural followup to yesterday's review of an important antiwar book, Scott Horton's Fool's Errand, is the recent Peter Quadrino blog posting/essay, "Waging Peace from the Inkbattle House: Finnegans Wake in the Shadow of War." The essay posted on the blog is actually the full version of the presentation PQ made at a Joyce conference.

As we seem to be in a time of endless war, as highlighted by Horton's book, with the possibility of worse to come, PQ's discussion of the composition of Finnegans Wake on the eve of World War II seems timely.

As is usual with PQ, he pays careful attention to the text:

Shem the Penman, emblematic of the author of the Wake, composes “o peace a farce” (FW 14), a piece of farcical art that is a force for peace, leading us to wonder “Is the Pen Mightier Than the Sword?” (FW 306) Hiding up in his “inkbattle house” (FW 176), Shem cunningly attacks the powers of “awethorrorty” (FW 516) with his comedic art ...

Some of what PQ writes has echoes of what I've seen in the writings of Robert Anton Wilson:

The Wake’s anthropological view of warfare and militarism is always scatological, invoked right from the first page with “penisolate war” (FW 3), The Peninsular War where Wellington and Napoleon first clashed. Warfare in Finnegans Wake is reduced to a pissing contest (hence, Waterloo), having to do with the nether regions, characteristic of anal-territorial animal aggression implied by using excrement as territorial marker. As Timothy Leary liked to say, “The only intelligent way to discuss politics is on all fours.” Or as the Wake puts it, “All’s fair on all fours.” (FW 295)
on October 19, 2017

Thanks for sharing, Tom! And yes, RAW's discussion of the war element in FW was a major influence on the paper. "Coincidance" was one of my sources.