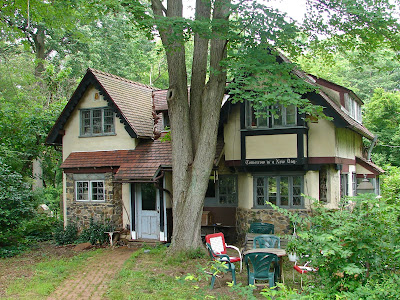 A house in the small municipality of Arden, Delaware, built in the style of town founder Will Price. (Information here.) Wikimedia Commons photo.

In the essay "Left and Right: A Non-Euclidean Perspective," reprinted in Robert Anton Wilson's Email to the Universe, RAW approvingly mentions the 19th century political philosopher Henry George, as follows, in a passage listing various Utopian schemes that he'd like to see tried: "I am still fond of the system of Henry George (in which no rent is allowed, but free enterprise is otherwise preserved)..."
"
The wording of Wilson's article suggests that none of the Utopian schemes he liked had ever been tried. So I was surprised to read Jesse Walker's excellent article, "Delaware's Odd, Beautiful, Contentious, Private Utopia," which reveals that a town in Delaware, Arden, and several other towns in the U.S. were founded based on George's principles.

Jesse explains that George was "a 19th century economist who argued that government should be financed solely by a tax on land values. No income tax, no sales tax, no tax on the improvements to a property—just one tax on land."

The town is still run largely on Georgian principles. A private land trust owns the land, and people who lease the land support the town government by their least payments: "The trust collects rent from the town's leaseholders and, as the sole property owner, it pays everyone's county and school taxes. The rest of the rent goes to the municipal government. That bundle of money makes up the vast majority of the Arden budget—usually about 90 percent of it—though the town has a few additional sources of income, such as the rent for the antenna on the water tower (and, yes, the state's street aid). The county provides some services, and the rest are done either internally, as with the volunteers who run the local library, or by companies that contract with the village, as with the business that collects the trash. The big decisions are made in town meetings."

There are a couple of passages in Jesse's article (published in Reason magazine but available online at my link)  that could be read as quiet shout outs to Robert Anton Wilson fans, such as this sentence: "The Alabama town of Fairhope had been established on the same land-trust model in 1894, and several similar experiments were launched in the first few decades of the 20th century—enough for the Single Tax settlements to have their own baseball championship, which Arden won in 1923." 1923 has a 23 and also conforms to the Law of Fives as it adds up to 15, although of course Jesse could innocently explain he had no control over when Arden won its baseball championship. The Illuminati also put in a brief appearance. Is is Jesse's fault the town has been mentioned as a haven for the nefarious secret society?

BONUS! Jesse on the partial release of the JFK assassination files.
on October 27, 2017