The BBC on Discordianism, RAW and Illuminati paranoia 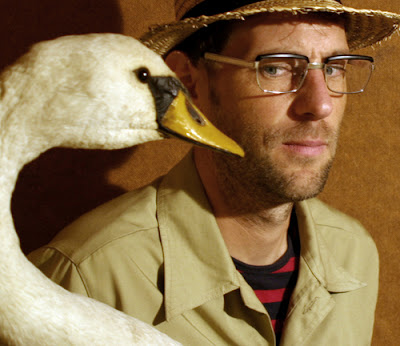 David Bramwell (from his official website.) I don't know who his friend is.

The BBC has an article posted online, "The accidental invention of the Illuminati conspiracy," which, apparently relying heavily on the theories of David Bramwell,  argues that the obsession with the Illuminati in the world of hip hop was generated by Discordianism and the popularization of it in Illuminatus! by Robert Anton Wilson (mentioned by name) and Robert Shea (relegated to "another Playboy writer," a particularly clear example of Shea being erased from the record despite his own importance as a writer.)

The article by Sophia Smith Galer mostly moves on to discussing why many people believe conspiracy theories, but I'm more interested in whether Illuminatus! really had such a large effect on popular culture. I'm pleased that it has sold a reasonable number of copies and remains it print, but it never seemed as ubiquitous to me as, say, Stranger in a Strange Land or Lord of the Rings or Dune.

I decided to ask for a second opinion from the guy who "wrote the book" on conspiracy theory, so I emailed Jesse Walker, author of The United States of Paranoia: A Conspiracy Theory.  (The book has a chapter on Discordianism, and if you read this blog, you should hunt up a copy.

I emailed Jesse a link to the BBC article and asked, "Do you think it's plausible that 'Illuminatus!' gave rise to all of the Illuminati paranoia of today? I am skeptical, but I thought I would seek the opinion of the guy who wrote the book on conspiracy theory."

He replied, "All of it? No, of course not. Not even all the Illuminati obsessions -- you can trace a lot of that back to the trilogy, but I think there were more significant sources for the hip hop Illuminati stuff."

Bramwell, BTW, has a book out, The Haunted Mustache, that looks interesting.

behold a pale horse is vital. you can trace the big influences through the books which are referenced in songs and interviews. RAW is conspicuous by his absence

I agree with heronbone. Behold a Pale Horse was recommended reading by the Nation of Islam, and the N.O.I. was a major influence in early Hip Hop culture particularly through the Five Percenters.