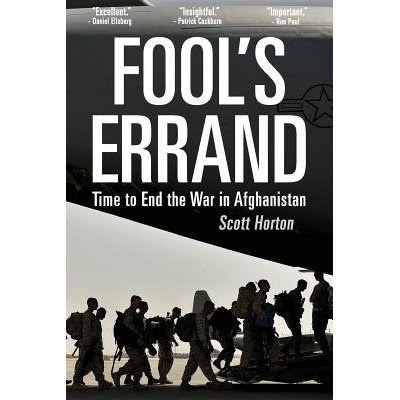 If you lean at all toward an antiwar position -- if you are at least open to the idea that the U.S. should not fight endless Asian land wars -- you need to read Scott Horton's new book, Fool's Errand: Time to End the War in Afghanistan.  I happen to agree with Horton's position, but it's also a well-researched, interesting book, a lively and interesting read.

Here are some of the things you'll learn if you read Horton's book:

• There is nothing particularly Islamic about suicide bombers. It's a tactic used by combatants who have no other means to inflict serious casualties. (Horton does not mention this,* but the history of World War II in the Pacific illustrates the point. The Japanese resorted to kamikaze attacks after their navy was at the bottom of the ocean.)

• The U.S. is no closer to defeating the Taliban now than it ever was.

• The war in Afghanistan is now the longest war the U.S. has fought.

• The U.S. could have fought a limited war to get rid of Osama bin Laden and his allies, getting out of Afghanistan within a few months.

• If you serve in the U.S. armed forces, you are not likely to be "fighting for freedom." You will be fighting to subjugate people into the American empire.

• Many of the people we are killing over there are not terrorists or enemy combatants.

• As badly as the Taliban treat women, they are actually better than many of the folks we support. The Taliban at least are less tolerant of rape than many of our allies.

Horton uncovers endless outrages. I could cite numerous passages in the book; here is one. After describing how the Obama administration in 2016 sought to bolster the Afghan government by purchasing Russian MI-25 attack helicopters from India (to get around U.S. sanctions against Russia), Horton writes,

"India's continued willingness to train and equip Afghan National Army forces in their fight against the Afghan Taliban and the Haqqani Network amounted to nothing less than a 'proxy war' between India and Pakistan in Afghanistan, in the words of reporter Charles Tiefer, a proxy war in which the U.S. remains on both sides. All this virtually guarantees the Pakistani state will increase aid to their favored insurgent forces in response. The Americans could not be employing a more self-defeating strategy if sabotage was their actual goal."

Your tax dollars at work! Did you know that India was intervening in Afghanistan, with American encouragement? The book is full of such surprises.

* Correction: He does in fact mention it.