Mozart's Masonic opera, in a theater near you 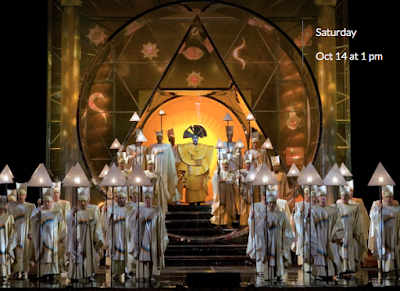 Scene from the Metropolitan Opera's production of The Magic Flute

A reminder and a correction: The Metropolitan Opera's broadcast of Die Zauberflöte (e.g., The Magic Flute) will be at 12:55 p.m. Saturday at a movie theater near you, unless you live in the middle of nowhere. See this link to figure out how to find a theater, etc.

As I wrote earlier, The Magic Flute has Freemasonic elements (note the "eye in the pyramid" motif above.) It was Beethoven's favorite Mozart opera.

In that earlier post, I wrote,  "Isis and Osiris are invoked in the course of the plot, and the main characters have to undergo an initiation. Given Robert Anton Wilson's interest in Mozart, I'm surprised that he never talked about this opera (as far as I know)."

The first sentence is true (as far as I know), but I now know that RAW did talk about the opera, at least once.  RAW stated that the Magic Flute is a Masonic initiation turned into an opera and that the opera has Illuminati ideas.

I can't guarantee a good experience at the theater, but the New York Times seems to like the new production.  And here is a positive review.

An adult ticket costs about $25. For those who like this sort of thing, it's a good experience.